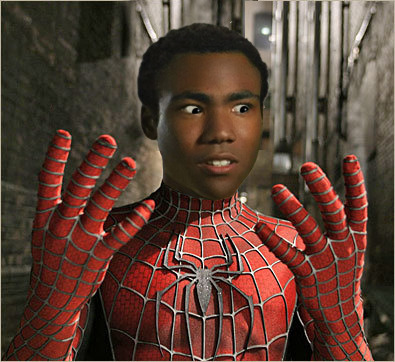 Donald Glover is one hell of an accomplished 26-year-old. He can write, he can act, and he really loves Spider-Man. He wants to audition for the part in Sony’s upcoming Spider-Man movie, and now the rest of the world seems to be joining the cause.

Glover’s not-all-that-humble beginnings were with the YouTube sensation Derrick Comedy, most commonly known for this bro-tastic video with over 7 million views (but a bunch of those were me, so, you know, not quite as impressive). From here, Glover skyrocketed up the comedy writing ranks, landing a job at 30 Rock. And at the February 2009 Writers Guild of America Awards Glover was nominated in the Best Comedy Series category for his work on the show.

Now Glover is showing his acting skills to a primetime audience as the hilariously oblivious Troy on NBC’s Community. As a strong actor, a strong writer, and an all-around cool guy, it’s about time this guy really makes even more of a household name for himself. What better way than by playing the next Peter Parker?

After the campaign to get Betty White on SNL worked out astonishingly well (and spawned this), Facebook has become the new place to petition the media elite. The “Donald Glover 4 Spiderman!!” campaign is already up to over 3,600 members. Not bad for a group that’s only existed a day and doesn’t pressure you to invite all your friends for some hackneyed idea of a social experiment.

For more evidence of the phenomenal nature of this campaign, here’s the Twitter counter for Donald Glover. And the not-quite-as-trending-but-still-trendy topic of #donald4spiderman is rampant across the Twittersphere.

So clearly a lot of people think he’d be great for the role. Some are probably just major fans of his, and others are looking for someone to provide racial diversity in the realm of superhero protagonists. The question is: Given what we know about Glover from his work, is he cut out for the role?

Could Glover do the charming awkward side of Spider-Man? Most definitely. That much is clear from his portrayal of Troy on Community. My personal concern is whether he could handle the gritty dark scenes and the great anger the role must exhibit toward’s its villains. Basically, Glover is an obviously strong choice for Peter Parker, but will have to prove himself a hero before he deserves the role. Luckily, he wants to do just that: 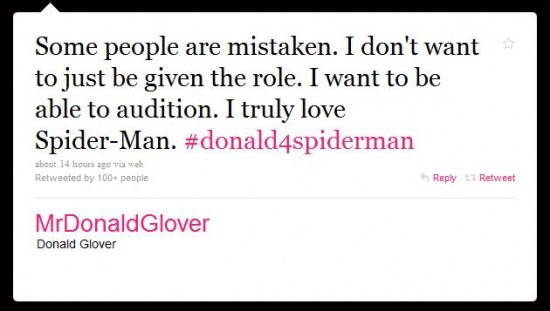 If you need incentive to get behind this, here’s a quote from iamdonald.com: “I’m putting myself in the running for the Spiderman reboot. I’m actually quite interested to see how far this goes.  If this happens, I’ll buy each and every one of you a mini cooper.”