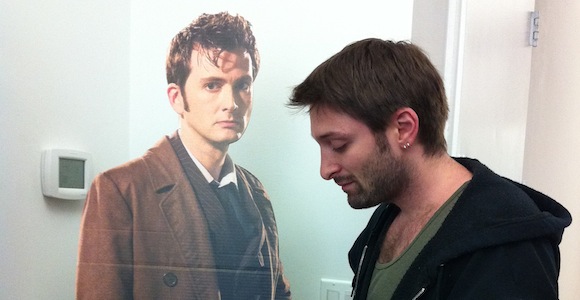 James and the Doctor had to take a moment to compose themselves after the confirmed news that the seventh season of Doctor Who will be delayed until fall 2012.

You have to understand… the Doctor isn’t angry. He’s just disappointed. (He also wants you to remember, when all this is over, that he offered you a choice.)

It seems likely that only half of Series 7 will be shown in Autumn 2012, with the remainder coming early 2013. This means the Christmas 2012 episode would air in the middle of a series rather than the end.

It would also mean that 2013 would see an eighth series airing in time for the 50th anniversary.

(via Blastr and Bleeding Cool, the utterly candid photo was taken in our offices.)