Join the Doctor, Bill and Nardole for the new series of #DoctorWho – starts 15th April on @BBCOne with ‘The Pilot’.#TimeForHeroes pic.twitter.com/ZPYi4IMvRT

At long last, the trailer we were promised today for the upcoming tenth season of Doctor Who has dropped, along with a new image! Let’s enjoy (and overanalyze) them, shall we?

We’ve already had a couple of trailers to soothe us through the way-too-long wait for Peter Capaldi’s final season as the Doctor. One focused on the Doctor’s new companion, Bill. The other focused on the danger involved in following the Doctor. Now that the new season of Doctor Who is finally almost here, the latest trailer gives us a real sense of all the adventure we’re going to see:

The BBC also released a fun new image of the Doctor grasping Bill up into the air as the TARDIS takes off: 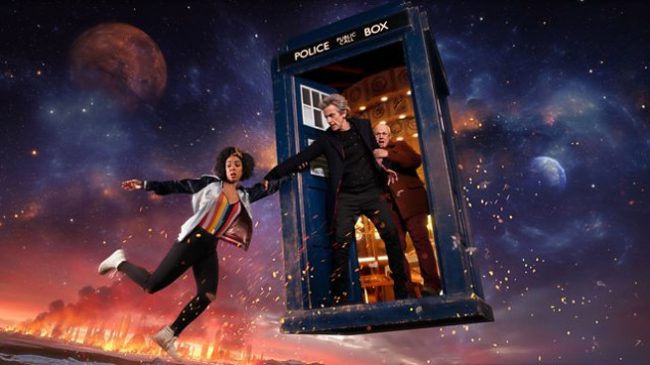 I’m already sold on Mackie as the new companion, and I’m looking forward to seeing more from Matt Lucas as an actor. And already, I’m starting to feel the tears well up in my eyes. Whereas Matt Smith was “my Doctor,” but was often given stories that were too puzzle-boxy, or otherwise not worthy of him, I’ve actually come to love Capaldi’s Twelve, because the stories (with a couple of clunky exceptions) have been really quality, and examining topics and emotions that make sense when you have an older actor playing the Doctor, like death, or one’s legacy/reputation. Capaldi has managed to be stern and aloof sometimes, while being a rock n’ roll Doctor at other times. I’m looking forward to seeing more of him, and I’m going to miss him when he’s gone.

What do you think? Are you excited for Doctor Who? Not much longer to wait now. Season 10 premieres April 15th!