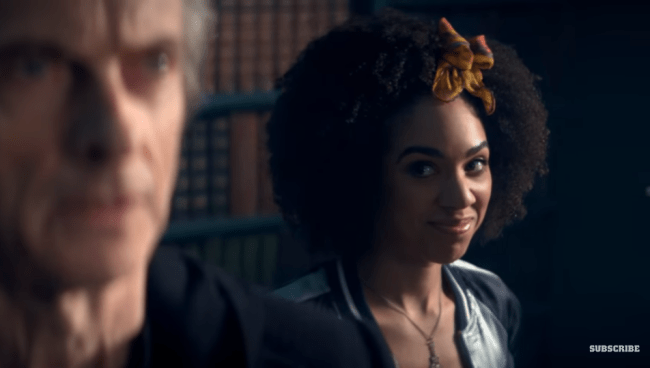 The latest trailer for Doctor Who Season 10 doesn’t reveal too much, but we do get to hear from the new companion, Bill Potts, who’s played by actress Pearl Mackie.

“The first time you meet him, he’s funny,” she says. “The second time, he’s amazing. The third time, you realize he’s the most dangerous man in the universe.”

“He says he’s a man of peace, but he walks in war,” she continues. “I’m having the time of my life, and I wouldn’t miss it for the world–even if it kills me.” This quote may turn out to be quite telling. While Doctor Who loves its hyperbole, it’s worth nothing that Mackie only has a one-year contract, and there are rumors that season 11 will represent a “clean slate” for the series. Her character may indeed die by season’s end.

In the teaser, Bill, the Doctor, and Matt Lucas’s Nardole stalk dramatically through a library. They eventually arrive at a smokey wall of obscured faces, which seems to depict the various villains from this season. Fans are already speculating about their identities.

Taking a stab at analysing that #TimeForHeroes #DoctorWho trailer. I spot #Daleks, #Cybermen, and #IceWarriors. pic.twitter.com/J9S5muuxAN

Season 10 of Doctor Who premieres on April 15 on BBC America.

(Via GamesRadar, io9 and ComicBook.com; image via screengrab)