Last year, the BBC held a special contest called Script to Screen, where primary schools could compete to write a winning script for a Doctor Who short. The best would be produced and filmed with all the pomp and circumstance of a real episode of Doctor Who. This year’s winner has just premiered (and therefore made it on to YouTube), and it goes by the name “Good as Gold.” It’s funny and cute, very Olympics-propaganda-y (and this coming from someone who is already discussing the menu for an opening ceremonies party) and definitely should not be part of a serious effort to fit it into DW canon, but the most interesting thing about it is that it goes right along with some tweets from the official Doctor Who twitter about this Saturday.

Which incidentally is when the Olympic Torch relay will pass through Cardiff, the studio location of Doctor Who. Who fans, you know why this is important. For everybody else, I’ll explain.

Waaaay back in 2006, the episode “Fear Her,” aired, and, long story short, it was set in 2012 and culminated in the Doctor (then played by David Tennant) completing the very last leg of the Olympic torch relay and lighting the official torch of the games on international live television. Now that the time at which it would be possible for reality to confirm fictional details of Doctor Who is nigh, fans have understandably become very interested in any possibility that Doctor Who might have something to do with the torch relay, with David Tennant lighting the torch as the most perfect of all outcomes. Whether or not anybody expects it to happen is another story.

But that brings me to a couple of tweets from @BBCDoctorWho: 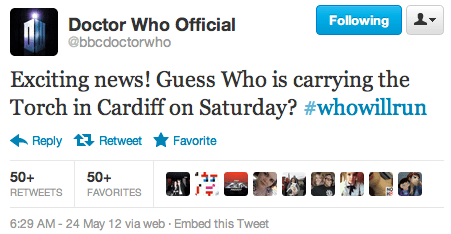 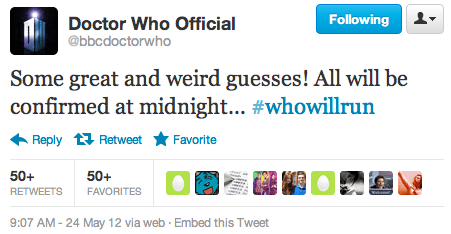 And also the initial The Mary Sue reaction to it.

Susana: THIS IS NOT ENOUGH INFORMATION

We’ll just have to wait and find out tomorrow. It’s okay. Doctor Who fans are pretty good at waiting by now.