Biologist Proposes to Biologist Girlfriend in Fragments of Actual DNA 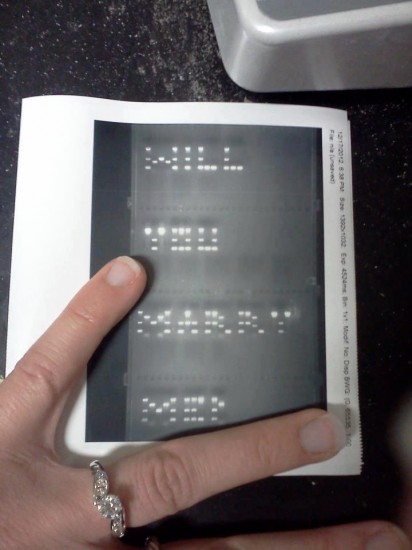 So bear with me on this awesomely sciencey proposal.

Redditor gdiguy2 decided to use gel electrophoresis to display a proposal of marriage to his girlfriend, who is also a biologist, by tricking her into imaging a specially prepared gel that he said was part of his research. The way gel electrophoresis works is you start with a bunch of DNA or RNA that’s been cut into pieces by an enzyme. You lay it out in a row on some gel, and then you run an electric current through the gel. Due to being polarized, the fragments of the DNA/RNA will travel towards the far end of the gel. The smaller ones will have an easier time of it, so they’ll travel farther and faster. Now, unfortunately, I can’t for the life of me remember what useful information this reveals to scientists, although Wikipedia is telling me that gel electrophoresis is used in forensics (as in genetic fingerprinting), molecular biology, genetics, microbiology and biochemistry. And, of course, AP Biology courses.

So, how did gdiguy2 create this effect?

They’re 5 sized PCR fragments (roughly 150, 300, 500, 700, 1kb), I went back through my notes to find 5 primer pairs that I knew worked pretty well (so don’t feel bad, they’re selected out of primers that had been pre-validated =p). The other lanes are just mixes of the 5 sizes (either 2:3:4 or 4:6 volume mixes going in decreasing size, since larger fragments tend to be brighter). The gel actually didn’t take that long (though it was terrifying loading it), but I made a mockup in Illustrator beforehand (along with a ladder to test what sizes to use), and then sketched it out beforehand so I knew what to add to each lane.

700 was the hardest to find for some reason, so I didn’t really care about whether it was perfect or had primer dimers (and yeah I’ve had a friend complain to me about that also)

Gloves were used handling the actual gel; I don’t usually bother with gloves for the printouts unless I dropped the gel on it or something

The most difficult part of the entire thing was actually coming up with a good enough excuse to get her to image a gel in my lab! And meeting a girl nice enough to actually agree to do that while believing it was my real work!

He also wants everyone to know that he also proposed verbally, with flowers and a ring, a few minutes later outside the lab building (apparently he felt the lab itself was too full of cockroaches to make a nice setting). We’re just glad he didn’t take one of his colleague’s suggestions: that since his now-fiance’s research is in mouse genetics, he should hide a ring inside one of her about-to-be-dissected subjects.