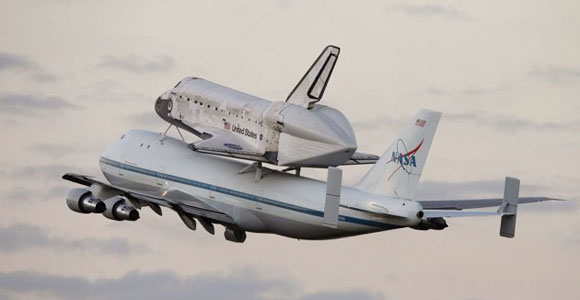 Space shuttle Discovery took off from Kennedy Space Center in Florida on the 12th mission of the shuttle program on August 30, 1984. It landed for the last time on March 9, 2011 on what marked the 133rd NASA shuttle mission. Today marks another momentous occasion for Discovery, it took its final trip into our atmosphere with a little help from a friend.

“Discovery departed Florida’s Kennedy Space Center at daybreak Tuesday aboard a modified jumbo jet bound for Washington, where it will become a Smithsonian exhibit,” reported the Associated Press. “Nearly 2,000 people — former shuttle workers, VIPs, tourists and journalists — gathered along the old shuttle landing strip to see Discovery off. A cheer went up as the plane taxied down the runway and soared into a clear sky.”

People didn’t just gather on the landing strip, they gathered on streets and rooftops in the surrounding areas to catch a glimpse of the shuttle, which is the the fleet leader with 39 orbital missions, spending a cummulative 365 days in space. It also carried 246 people into orbit during its time.

“[It’s] the first of the three retired space shuttles to head to a museum,” writes the AP. “It will go on display at Dulles International Airport in Virginia, taking the place of the shuttle prototype Enterprise. The Enterprise will go to New York City. Endeavour will head to Los Angeles this fall. Atlantis will remain at Kennedy.”

Notably, Discovery was the shuttle that launched the Hubble Space Telescope in 1990 and returned a then 77-year-old John Glenn to space in 1998. Commercial space missions are currently in development but until then, “NASA astronauts will have to hitch multimillion-dollar rides on Russian Soyuz capsules to get to the International Space Station,” says the AP.

What do you think of the history-making flight? Do you have a memory of Discovery? Share it in the comments!

(via Yahoo, image by Pierre Ducharme)