The Dirtiest iPads of Them All: McDonald’s Offering Free iPad Use to Dining Customers 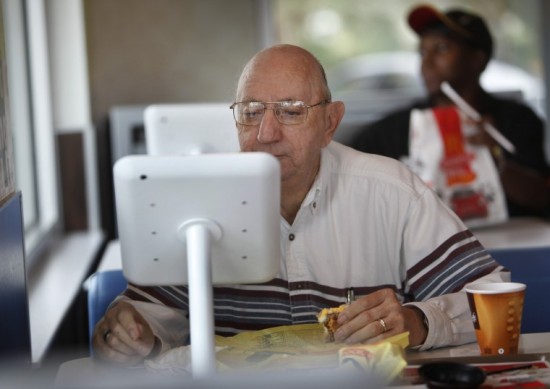 Not content with the fast food business, a McDonald’s in Hampton Roads, Virginia is giving customers the option of free iPad use should they decide to leisurely dine inside the establishment, rather than the hit-and-run dining to which we’re all accustomed when it comes to McDonald’s. One can only imagine how dirty those screens must get from all the burger juice and fry grease.

The iPads aren’t just placed on the plastic tray when you order a number two with just cheese and ketchup, but they’re bolted into stands that raise from tables, so one doesn’t walk off with a new, free iPad and a side of fries, but also so customers can have a hand free to eat while they do whatever it is one might do on an iPad. Hugh Fard, owner of 11 other McDonald’s locations and the man who opened the new iPad-equipped one, saw the idea at a worldwide McDonald’s convention. A French company created the in-store iPad feature, and Fard wanted to bring it to his restaurants. He had to get approval from McDonald’s HQ, and after two months of deliberation, he now has a store that offers free use of fancy tech devices with probably instantly greasy screens.

The iPads are leased, so the French company will replace them if broken or stolen. The iPads aren’t without limitations, as Fard has blocked certain websites, like YouTube, due to potentially unsavory content being accessed. One can only assume he isn’t aware of the locations of all of the unsavory content on the Internet, though.

Unfortunately, McDonald’s hasn’t taken to the idea just yet. They don’t have plans to launch the iPad idea at other locations, but will first monitor Fard’s new iPad-equipped restaurant for eight months. As nice as free Wi-Fi and iPad use may be, however, we’ll tell McDonald’s headquarters right now that we’d trade it all for a more common McRib.