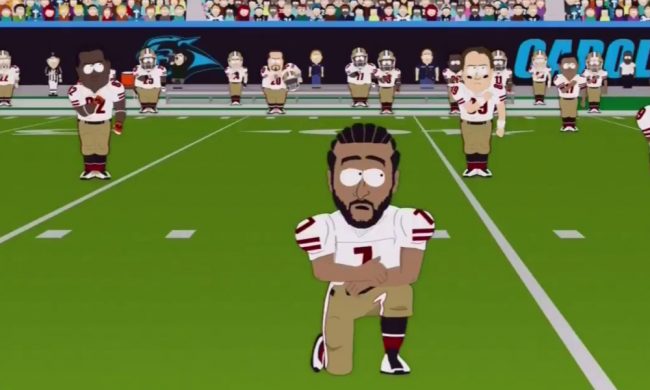 It’s always so amusing to me that the people who are usually the first to complain that others are too “easily offended” by things like, you know, racism, sexism, homophobia, transphobia—little things like that—are the first to kick, scream, and attempt to curtail the freedom of others over things that don’t actually affect anyone’s actual life.

After entire NFL teams began taking knees in solidarity with Colin Kaepernick and Eric Reid of the San Francisco 49ers, protesting the ways in which the United States has systemically oppressed and killed its black citizens, DirecTV began receiving complaints from subscribers to their football package.

Because the content of what happens at a football game is totally the responsibility of the satellite service that broadcasts it. That’s totally how it works.

According to The Hollywood Reporter, “The football package can cost up to $300 for the season, but there are a variety of discounts available. Usually, there’s a grace period, then refunds are not offered, but a customer representative said refunds are being given after the normal grace period when subscribers complain they’re offended by players who have been kneeling during the national anthem.”

First of all, setting aside these people’s opinion of the NFL protests for a moment, IT IS NOT A BROADCASTER’S JOB TO FINANCIALLY COMPENSATE YOU BECAUSE YOU’RE OFFENDED. You’re free to unsubscribe and not watch. That’s well within your rights. But to expect money because you don’t like something that’s happening at a football game? That is the absolute height of entitlement and privilege.

You know what? When the people you oppose protest, they’re not asking for something as minor as money. They’re asking not to be killed. They’re asking to be treated like human beings. That’s worth way more than the $300 you might be out because you don’t like it when black people stand up for themselves.

Second, let’s unpack this: you who interpret the NFL protests as being “against the anthem and the American flag” are more concerned with disrespecting the symbols of America than you are with preserving what those symbols are actually supposed to represent. You bring up disrespect to the military, but service men and women didn’t fight and die to protect a piece of cloth in the shape of a flag, they died to protect what that piece of cloth stands for. They didn’t fight and die to protect a song, they fought and died to protect the ideals that the song represents.

Lemme put this in terms you might better understand. You know the phrase “Keep the Christ in Christmas,” right? You might even believe in it, being as into “values” as you are. What does that mean? That Christ is the important part of the holiday. That you don’t want the holiday to be secular, nor do you want Christians to be distracted by the trappings of Christmas. The important part isn’t the tree, or Santa Claus, or the presents, it’s the fact that it’s a day marked to celebrate the birth of Jesus. He’s the important part. That’s totally understandable.

Making these protests about “disrespecting” the flag or the anthem is like someone looking at your desire to center your Christmas around Jesus and then complaining that you’re being disrespectful to the Christmas industry. Christmas tree farmers and mall Santas work really hard to provide trees and joy with which to celebrate your holiday! How dare you spit in their faces like that! So disrespectful!

But that’s not the point, is it? It isn’t that you hate Christmas trees or Santa Claus, it’s that you don’t want to lose sight of what those symbols actually represents. And so you protest. With memes and slogans, you protest. In conversations with others you protest. Publicly and privately you protest: “Keep the CHRIST in CHRISTmas!” And people are free to care or not care about that, but no one can tell you you’re wrong to do it.

Those taking a knee, in football or anywhere else, are doing so because the things that the flag and the anthem are supposed to represent don’t exist for everyone in this country, and it’s high time that we worked to change that. So, instead of worrying about the trappings of patriotism, perhaps we should concern ourselves with building a country worth being patriotic about.

And maybe, rather than worrying about coddling those entitled enough to ask for a refund because they don’t like it when black people spur social action on television, perhaps DirecTV shouldn’t humor racists and trust the fact that the subscribers who support the protest, whether they believe the protest is founded or not, far outweigh the subscribers who don’t.

And let’s be real: it’s totally about race. Black men got “uppity” and dared to insinuate that the symbols of this “great country” are a lie. They should be grateful (for what, exactly? For having to work twice as hard as white people for what they have, all while constantly being worried that their next trip in a car might be their last?).

If a white NFL player had taken a knee during the national anthem to protest America’s mishandling of a pumpkin-spice-everything shortage, we wouldn’t even be having this conversation.

Let’s remember that white men get to wave guns around, resist arrest, and are subdued with one bullet after over half an hour of gentle cajoling for him to put his gun down. Unarmed black men are riddled with holes when cops suspect they might have a weapon. That’s America right now. Is that what the flag and the anthem are supposed to stand for?