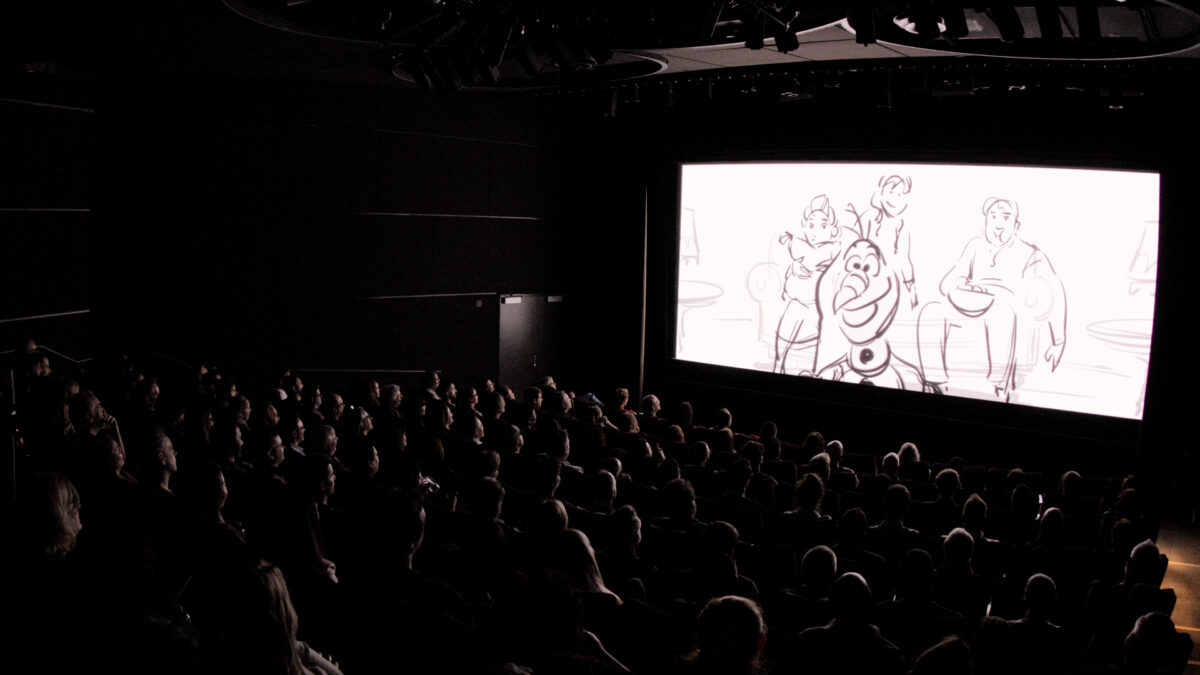 It’s strange, in a way, to view the creation of a movie from the biggest studio in the world, which was built on an incredibly popular predecessor and went on to make literal billions of dollars, as an underdog story. But in Disney+ behind the scene docu-series Into The Unknown: Making Frozen II, that’s exactly the story that we see.

In six episodes, director Megan Harding crafts a compelling narrative about a family of artists working their tails off to make the best movie they can, and how the most moving moments in Frozen 2 almost didn’t happen. Harding took the time to chat with me about making the documentary series and how she had to become part of the furniture to make sure they were getting the whole story.

The stars of Into The Unknown are the creatives behind the movie, from directors Jennifer Lee and Chris Buck, to Producer Peter Del Vecho, composers Robert Lopez and Kristen Anderson Lopez, and the hundreds of animators, musicians, engineers and artists that come together to create every second that we see on screen. That’s the world Harding wanted to reveal, and her subjects showed great vulnerability in letting her in. 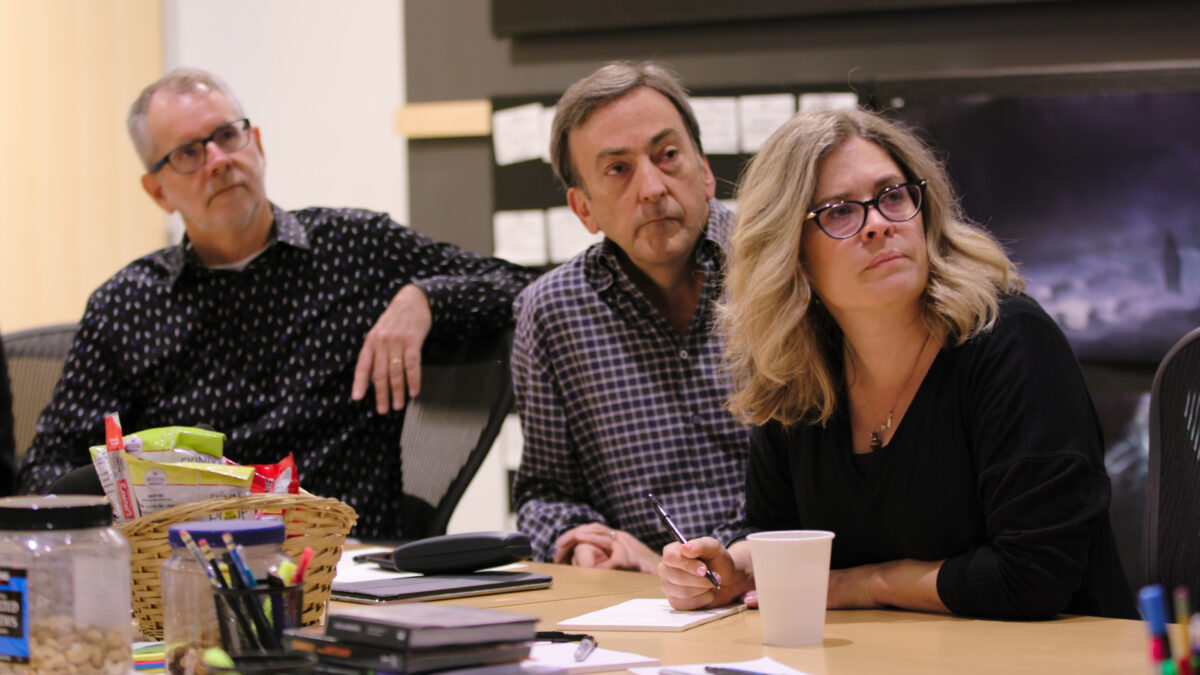 “Everyone brings so much of their personal experience, from the stars to the director right through to the animators and beyond,” Harding said of the love that went into this production. “There was obviously an immense amount of pressure,” she added of following up Frozen, but “the point that was most important to the filmmaker was that they didn’t let the fans down.”

The idea to make a series about the making of Frozen 2 came about relatively early, especially when Disney knew that Disney+ would be the platform for it. “We had made a one-hour documentary about Frozen one, but it was made a year after the original movie came out,” Harding told me. “We kept hearing these amazing stories about how they’d made that first movie … all that we could keep thinking is it would have been so good to actually see that process as it happened.” And Frozen 2 was a real opportunity to capture those moments, which Into the Unknown really achieves.

The song and sequence that the story of Into the Unknown revolves around is somewhat ironically not the song from which it takes its name, but Elsa’s second, most important number in the movie, “Show Yourself.” It’s incredible to watch the series, which starts about twelve months before Frozen 2′s release date, and see how this pivotal song almost didn’t happen so many times.

“When we started shooting, the very first thing we filmed was the December [2018] story trust,” Harding explained. The story trust is the group that controls the entire structure, story, and script of the movie, which has to, obviously, be finalized and locked at a certain point so the animators can do their work. “The things that we talked about in that meeting kind of became our road map to what we followed. Out of that meeting, it became clear that “Show Yourself” hadn’t found it’s place.” 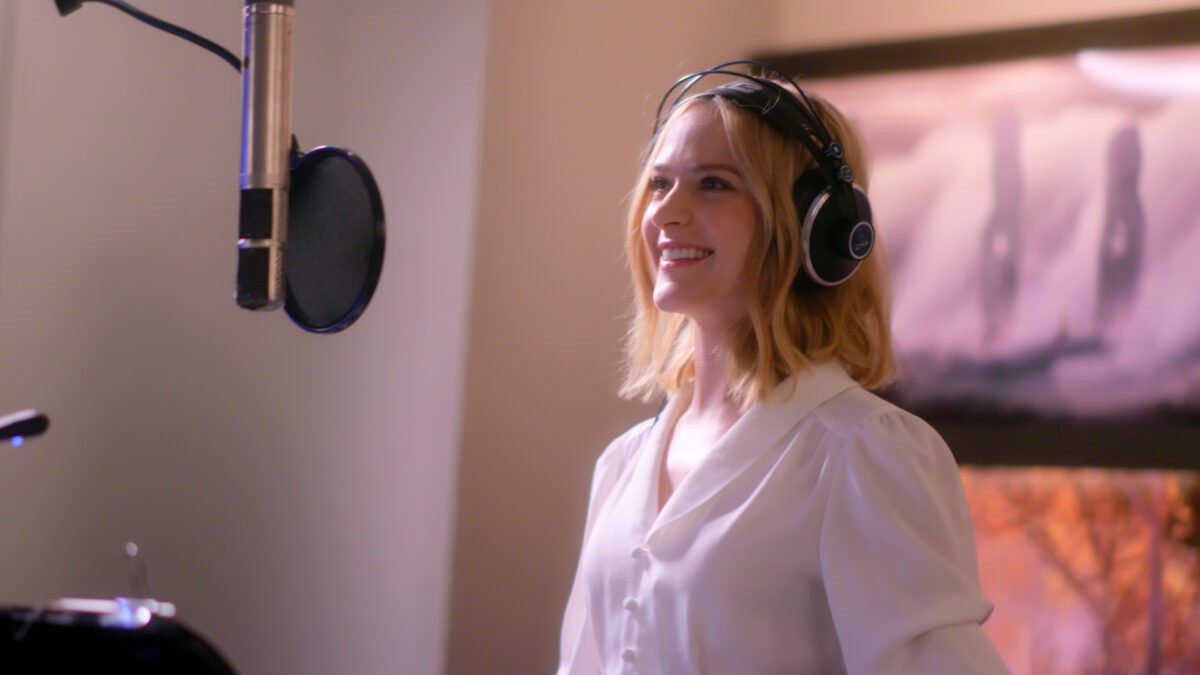 Evan Rachel Wood records her vocals on “Show Yourself.”

“We knew how important that moment in the move had to be, so we thought it would be very interesting to follow it, but I had no idea that it would take the twists and turns that it did.” And some of the twists and turns allowed Harding to capture those magic moments, including the exact moment where “Show Yourself” truly finds it’s meaning and resonance: when Evan Rachel Wood records her parts as Queen Iduna singing to her daughter, Elsa. Hearing a mother say “You are the one you’ve been waiting for” is the most powerful moment in an already powerful movie, and it almost didn’t happen.

“It is just wonderful to see that coming together,” Harding said. And it’s wonderful to watch the song find its place, and then the hundreds of hours of work and artistry that it takes after that to animate it.

But there were other moments that show up in the series that Harding was able to capture that also show that “magic.” For Harding herself, it was the recording of the orchestral part of “Into the Unknown” when that song truly came together for everyone watching. “It shows that vulnerability,” Harding shared. “Like you see that vulnerability and happiness and joy on the face of [Directors] Jennifer Lee and Chris Buck as they sort of see their creative endeavor coming together.”

Even with over 13,000 hours of footage from a year of work, there were still many aspects of making Frozen 2 that didn’t get filmed, particularly in the first few years of production. Much of the initial development of the story just didn’t get caught. The early and deep involvement of the Sámi people, which nonetheless vitally important to the production simply because it happened in the yeas before Harding arrived with the camera.

Amy Astley, who handles press for Disney and for this project, said, “That’s the hardest part of the documentary, you think, ‘six episodes, we’re going to be able to tell everything, and the Sami were such an important part of the process and continue to be so.” Astley added: “I was in Norway with [producer] Peter [del Vecho] when we showed a rough cut form to the Sami. And it was one of the most emotional screenings I’ve ever seen. Oh to have had a camera there. But it was a private moment and we wanted to respect that privacy.”

Harding has a gifted ability to capture vulnerability behind the scenes. So much that sometimes she wanted to break out of her role as a documentarian and tell her subjects they were doing great. “The pressure on them was so intense at that moment,” Harding said of the first test screening of the movie, when the stress for the creators was highest. But “The more we disappeared into the background it was obviously better… If we were just kind of the furniture in the way,” it helped to get the story told. 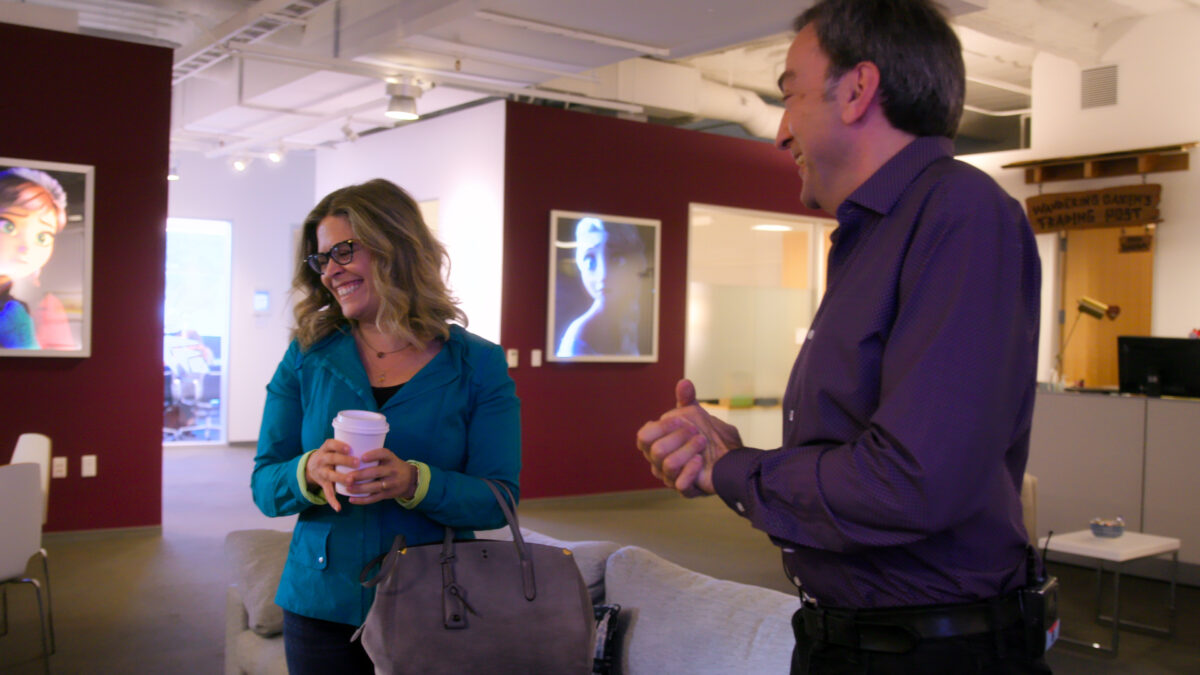 And again, there’s incredible openness and vulnerability in the series, particularly in episode three, where it’s revealed that the character of Ryder in Frozen 2 was named after director Chris Buck’s son, who died in a car accident right as the first Frozen ended production. “We knew about Ryder, and his loss,” Harding explained, when discussing the inclusion of that story. “I was not going to ask Chris about Ryder unless he was going to share that with us.”

The story of Ryder is just one way that the personal stories and vulnerabilities of the creators became part of Frozen 2. To see Jennifer Lee as a mother, director and writer is also inspiring. “What I was so impressed with [Jennifer],” Harding shared, “and I think this sort of trickles down through the production … she also has this vulnerability about her that’s very real and very human and very relatable, and I think she leads with inclusion and encouragement.”

Harding explained: “The idea of this docuseries was always to show the passion and devotion, the idea that creativity is really hard and they work really hard. Their attention to detail is never-ending … but it’s also that so much of their personal lives are put up on screen.” And that’s what makes the movies great. “I believe the Frozen movies resonate so much with audiences because they can see that even if they don’t know what the stories are.”

But it’s also a lot of work, much of which went down to the wire. “They work on it for a year two years, but on every project, it’s really the final three months where half the movie gets made,” Harding said. That doesn’t mean it’s not stressful for Harding to watch how hard everyone was working at the end, and to worry about if it was going to happen.

But it did happen, and the movie, particularly “Show Yourself,” was a masterpiece. “I had no idea how much work it would take so many people to find it,” Harding said. “It was really inspiring to find the commitment and dedication” of the animators, directors, and everyone involved. “And also the fearlessness, they’re so not afraid to throw something out if it’s not working. They understand how important it is to get things right and they will work and work and work until it finds its place in the movie.

It all paid off.

Frozen 2 and Into the Unknown: Making Frozen II are both streaming now on Disney+.