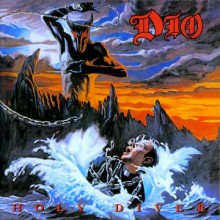 Ronnie James Dio, a wildly talented and creative pioneer of heavy metal, died of stomach cancer this morning at age 67. He will truly be missed.

Today my heart is broken, Ronnie passed away at 7:45am 16th May. Many, many friends and family were able to say their private good-byes before he peacefully passed away. Ronnie knew how much he was loved by all. We so appreciate the love and support that you have all given us. Please give us a few days of privacy to deal with this terrible loss. Please know he loved you all and his music will live on forever. — Wendy Dio

The loss is especially tough on fans of his who saw a glimmer of hope in the debunking of death rumors surrounding him: Just yesterday, prior to his death, rumors were spreading on the internet to the effect that Dio had died, which were quelled by his official Twitter feed: “”Don’t believe the rumors, Ronnie is still hanging in there!!!” Hugs, Wendy Dio.”

Part of what makes Dio’s loss so shocking is its suddenness: He was diagnosed with stomach cancer at the end of November, in the midst of successfully tours with his band Dio and with Heaven & Hell, the Black Sabbath successor band he fronted. When Ozzy Osbourne left Sabbath in 1979, it was Dio who took over and turned around the band’s fortunes, and popularized the “metal fingers” gesture we all know and love in the process.

Dio’s musical legacy is a far-reaching one: The LA Times, from which I first learned of this most unfortunate news, writes, with some justification, that Dio is “best known for his iconic wailing for Black Sabbath and, before that, Rainbow,” but for my money, he also put out some phenomenal stuff with Dio, the band that seemed like it was named after him but which he claimed was never meant to be a solo project. Dio’s first album, Holy Diver, is an oft-overlooked classic of ’80s metal.

Our deepest sympathy goes to Wendy Dio, to Dan Padavona, Dio’s adoptive son, and to all who were near to him.  If you wish to leave your condolences for Dio, you can do so on his Facebook page.