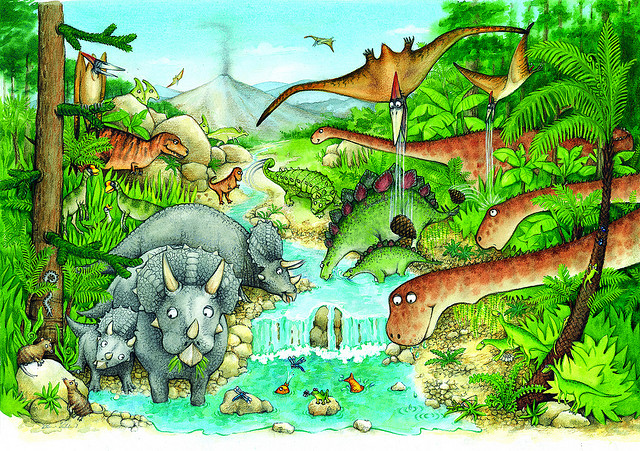 Sometimes when you’re a scientist, you do dignified things like name new species or cut the ribbons at a museum. And sometimes it’s your job to figure out if and how dinosaurs peed, a paleontological mystery that has been gaining popularity since 2002.

Previously, not a lot of scientific debate centered on the liquid emissions of dinosaurs. Fossilized poop already tells us a lot about their diet and digestive tracts, while also fulfilling our dino bathroom-humor requirements.

However, scientists at a 2002 conference for The Society of Vertebrate Paleontology were baffled by an 150 million-year old depression that they described as being “bathtub-shaped,” discovered among dinosaur tracks in Colorado.

The depression was ten feet long, five feet wide, and ten inches deep, basically the size of a small wading pool. But this was likely no pool-scientists hypothesize the dent is actually an enormous dinosaur peeprint.

Paleontologists Katherine McCarville and Gale Bishop theorized that since there was no obvious source of water that could have dripped onto the ground to form the impression, another possible explanation could be a peeing sauropod.

Say Bishop and McCarville, “The volume of fluid required to form a scour structure as large as the one in question suggests it may represent the expulsion of liquid urine from one of the sauropod dinosaurs crossing the tracksite.”

In other words, only a big-ass dinosaur could take a big-ass piss like that. And thus the interest in dinosaur pee was born.

Though the Colorado peeprint case was never written up in a journal, there is one possible wizz fossil formally written up.

In 2004 Marcelo Fernandes and other researchers published a study on possible pee-traces (or urolites, if you want to be fancy) discovered in the sand dunes of Parana, Brazil. The largest of these multiple marks was six inches across and three-quarters of an inch deep, possibly the work of a theropod or ornithopod during the Cretaceous period.

In the study, Fernandes and co. said the marks were caused by “an abundant falling stream of fluid.” To test their theory that said abundant stream was the work of a dino, the team even performed the highly scientific study of dropping two liters of water on the sand from two and a half feet up and examining the patterns made by the water.

Unfortunately, none of these urolites even offer conclusive evidence that dinosaurs peed at all. Crocodiles and birds, the living relatives of dinosaurs (and if you think that’s debatable, here’s an actual debate for you) both have cloacas, a single hole through which both fecal matter and urine are expelled in one disgusting ball.

However, birds such as ostriches eliminate liquid waste from their cloacas first before pooping. So if dinosaurs do pee, there’s a probably good chance they pee just like ostriches do. Although I doubt they also buried their head in the sand.