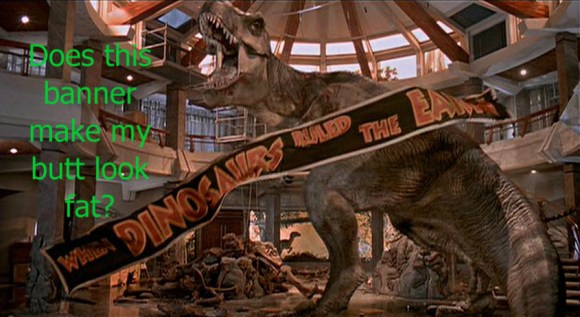 While trying to figure out the gait of the famed Tyrannosaurus rex, paleontologists came to an astounding conclusion: the fierce, gigantic carnivore was the Kim Kardashian of the upper Cretaceous Period! Yes, indeed, everyone. You came here for a discussion on dinosaur butts, and you will not be disappointed. Science knows what we want, and prehistoric posteriors we will get.

In case there was any confusion, no, paleontologists were not intentionally studying dinosaur butts. We’re not even sure they’d be granted the funds to conduct such a study. What they were researching for a new article that first appeared in Nature was the gait of the T. rex, how it walked, ran, and transported itself in everyday life. Going by its tracks as well as its skeletal structure, Heinrich Mallison of the Museum of Natural History in Berlin concluded that rather than the long, steady strides we saw in computer-animated renderings (e.g., the Jeep chase in Jurassic Park), the T. rex most likely had more of a rapid walk with a “clenched bum” and “stiff legs.” And with its weak ankles, it’s unlikely that it ever ran faster than 27 MPH. (“Must go faster … actually, we can chill. We’re good. … Actually, I’m bleeding profusely, so yeah — must go faster …”)

But this kind of gait, plus the physical evidence, led Mallison to believe that the T. rex must have had one big ass. But the kind of ass you can bounce a quarter off of. The musculature of the T. rex was extrapolated by comparing it to that of a bird, who also had little muscle strength in their ankles. But it’s the lack of muscle in the ankles that led to paleontologists figuring that a great amount of muscle in their rear ends allowed their strides to be fast, even while they weren’t that long. But again, this was not exactly a run, as much as it was a power walk. (If we ever run into each other in the street, I’ll be happy to demonstrate what I think this looks like, complete with tiny T. rex arms and a swishy tail.)

In conclusion, the great Tyrannosaurus rex might have been a ridiculous-looking animal with a funny walk and a giant butt. An insecure carnivore. Maybe a few of them found an unexpected friendship with the Brontomerus aka “Thunder Thighs.”