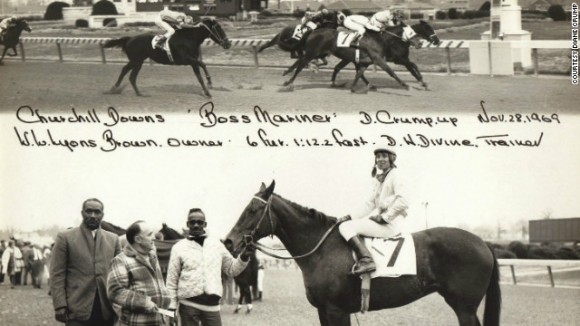 In the midst of the women’s rights movement of the 1960s, there was one feminist pioneer who was making inroads not in the office or as part of a protest, but on the track.

The woman in question is Diane Crump, the world’s first female jockey, who had to fight her way through an angry crowd just to get to her first race at the age of 18.

“The crowd was just swimming all over me. They were crazy, up in arms,” says Crump, now a grandmother of two and retired since 1999, in a conversation with CNN about her pathbreaking career. “The hecklers were yelling: ‘Go back to the kitchen and cook dinner.’ That was the mentality at the time. They thought I was going to be the downfall of the whole sport, which is such a medieval thought. I was like: ‘Come on people, this is the 1960s!'”

Things have gotten better since then in the world of horse racing; there are now several dozen female jockeys competing professionally in North America, and while that may seem like little compared to the couple hundred men, the sport might not be so far along as it is had Crump not been insistent in her desire to continue racing.

The whole article is worth reading, but one anecdote in particular is both funny and poignant. While racing in Puerto Rico in the early 1970s Crump realized that the jockey behind her was catching a free ride by holding onto her saddle. She hit him with her stick and, quoth the article, “The pair spent the remainder of the race hitting each other until finally he pulled away in the last leg and won.”

When he came off the track, the women in the crowd blasted him with tomatoes, eggs, anything they could find. They were booing their own country’s jockey, threatening bodily harm to him after the race, while I was greeted by cheering, enthusiastic women.

Crump suffered an accident in 1992 that left her leg broken in six or seven places, “but despite the fact I looked like some sort of bionic woman with braces on my legs, I eventually started training again.”