Dexter Wants to Go to Mars, Can’t Because He’s Seven, Gets Awesome Letter From NASA Instead

Maybe by the time Dexter grows up NASA will actually have a proper budget again. 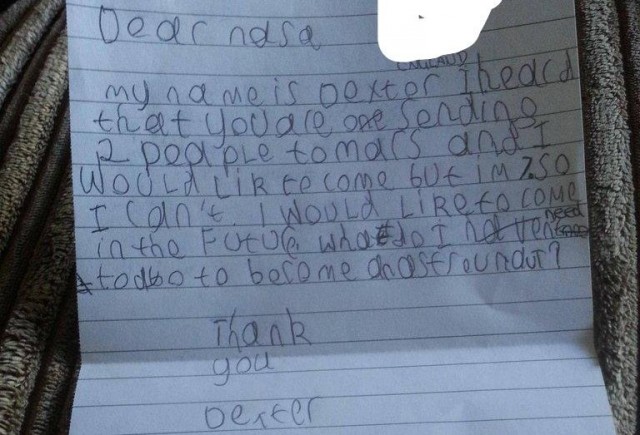 In case you wanted to feel some space-feels today, here’s a letter to NASA from seven-year-old Dexter. Dexter wants to be on NASA’s first mission to Mars, but regrets to inform you that he won’t be able to make the trip because he’s seven. NASA replied with a letter and some Mars swag, and Dexter’s mother posted pictures of it all to Reddit.

The letter NASA sent seems pretty standard, but it encourages young Dexter to keep his dream alive, and that’s wonderful. Take a look at what they sent in reply:

Dexter, the good news is that by the time NASA is actually able to send anyone to Mars, you’ll probably be old enough.

In about twenty years if there are any astronauts named Dexter I’m just going to assume it’s this kid.