Talking Robot to Fly to Space With Japanese Astronaut

Because of course it's going up with a Japanese astronaut. 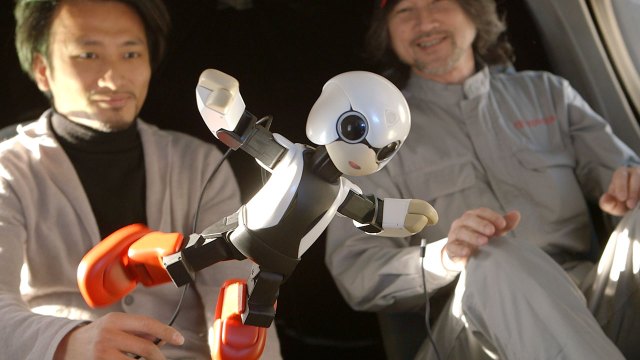 A 13.4 inch-tall humanoid robot named Kirobo will be launched into space in August. Kirobo, which has the capability to speak and carry out conversations, will join Japanese astronaut Koichi Wakada aboard the International Space Station as a conversation partner. Great news, so long as Kirobo will not be given control of the pod bay doors.

Kirobo fielded questions from journalists in Tokyo in a scene that must have been strangely familiar to them. Canned, robotic responses from a mindless drone at a press conference? This seems exactly like what most journalists have experienced previously.

According to its website, the Kibo Robot Project‘s goal is to “help solve the problems brought about by a society that has become more individualized and less communicative,” by giving people robots to talk to. The model that will go into space is called Kirobo, a play on ‘robot’ and ‘kibo,’ which means ‘hope’ in Japanese. The small robot can speak Japanese, recognize facial features, and learn from past recorded conversations to improve its communication.

When Wakada takes his position as the first Japanese commander of the International Space Station, he will have Kirobo to talk to in his own language. Barely more than a foot high and weighing only 2 pounds, the robot won’t be doing any physically demanding tasks, but it can be used to relay messages to Wakada from the control room, according to its creator Tomotaka Takahashi. A second robot, Mirata, will be stationed on Earth to monitor problems with its space-bound buddy.

Takahashi said that he was inspired by Astro Boy, and wants to create more human-like robots. He also talked about creating a robot that people could carry in their pocket like a smartphone. But I think language-loving robots are a great idea, so long as they get to work on Linguo next.

(via AFP and The Daily Mail, image via Kibo Robot Project)