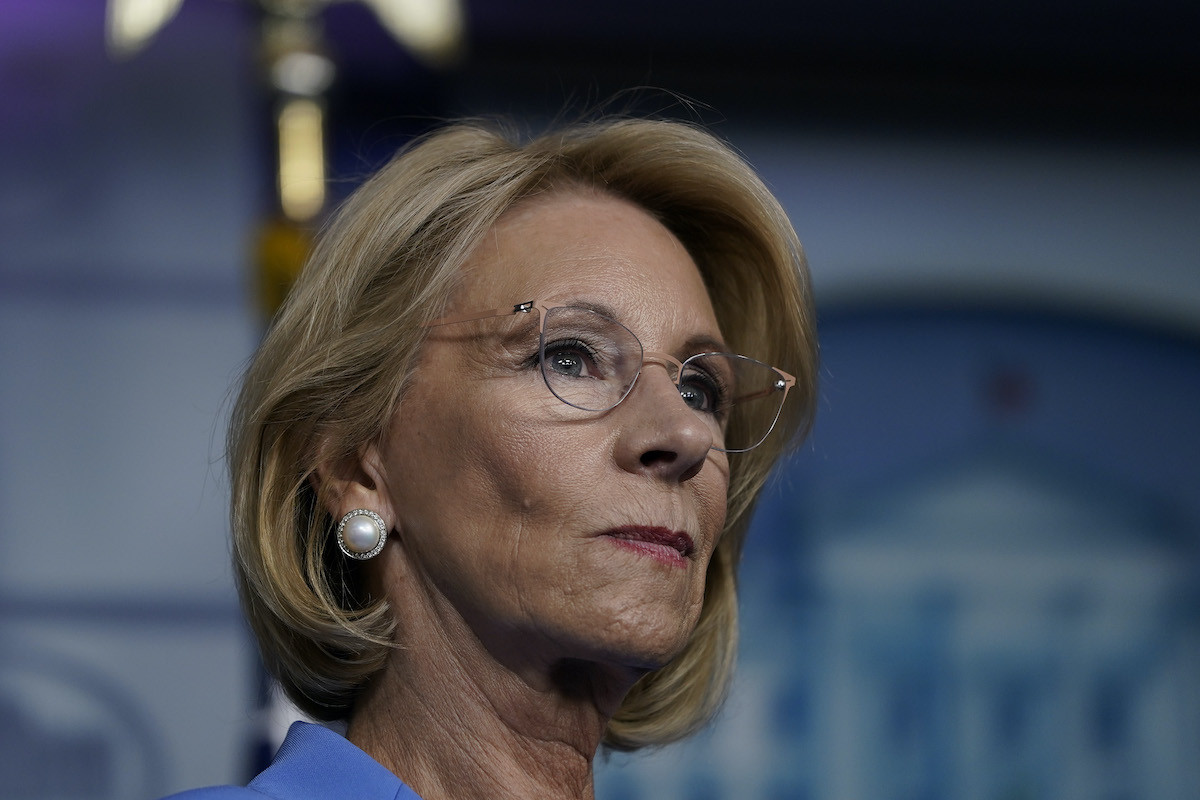 For the last three years, education secretary Betsy DeVos has been working on overhauling the federal policies on how college campuses handle instances of sexual assault, rolling back Obama-era protections for assault victims. She’s finally completed her directive and it has everything she wanted: more protections for those accused of assault, a heavier burden for victims, less responsibility for the schools, and a despicably narrowed definition of what even constitutes assault and harassment in the first place. It’s a patriarchal masterpiece.

Title IX is meant to protect students from sexual harassment, assault, and discrimination at public and private schools that receive federal funding. Under the Obama administration, new guidelines were issued to push schools to actually investigate and take action to stop and prevent those things. DeVos just made it a lot easier for them to go back to ignoring them.

Under the old guidelines, a school was mandated to act if it “knows or reasonably should know” about an instance of abuse, requiring only a “preponderance of evidence” (meaning basically just a good amount). DeVos’ guidelines allow the schools to avoid investigating until they are presented with “clear and convincing evidence.”

Colleges are now required to hold live hearings in which the accused and accuser can be cross-examined. The Obama administration discouraged cross-examination because it so often relies on smearing and discrediting victims. It also potentially gives an advantage to wealthier students who can hire private counsel.

The Washington Post notes that “advocates for sexual assault victims say the provision could subject survivors to more trauma and discourage them from coming forward. And universities complained that the requirement would turn their campuses into courtrooms.”

Also, for a school to be found legally responsible for an incident, they now have to be found to have been “deliberately indifferent” to the violation.

“Too many students have lost access to their education because their school inadequately responded when a student filed a complaint of sexual harassment or sexual assault,” DeVos said in a statement. But while the Obama-era guidelines pushed them to respond, you know, adequately, DeVos is going a different direction.

And where the Obama administration defined sexual harassment (a blanket term that includes assault and descrimination) as “unwelcome conduct of a sexual nature,” as well as “unwelcome sexual advances, requests for sexual favors, and other verbal, nonverbal, or physical conduct of a sexual nature,” DeVos has redefined it as “unwelcome conduct on the basis of sex that is so severe, pervasive, and objectively offensive that it effectively denies a person equal access to the recipient’s education program or activity.”

DeVos’s office claims that these new guidelines take “historic action to strengthen Title IX protections for all students.” But what she really means is that they strengthen protections for the accused and for the schools—everyone except the victims. And that makes sense since DeVos kicked off her Title IX reform project by taking meetings with a bunch of men’s rights groups who are famous for their belief that most sexual assault charges are false. That’s who DeVos sought counsel from on these issues.

DeVos had reportedly planned to release these new guidelines late last year but they had to postpone because of the overwhelming number of comments they received in opposition to the proposal—more than 100,000 comments in total. But it’s not like the new timing benefits students, despite the claim that that’s who this is supposed to ultimately benefit.

STUDENTS: we are literally hanging on by a thread trying to fulfill academic obligations during a global pandemic