Deus Ex: The Fall Impossible to Play on Jailbroken Devices

I never asked for this either. 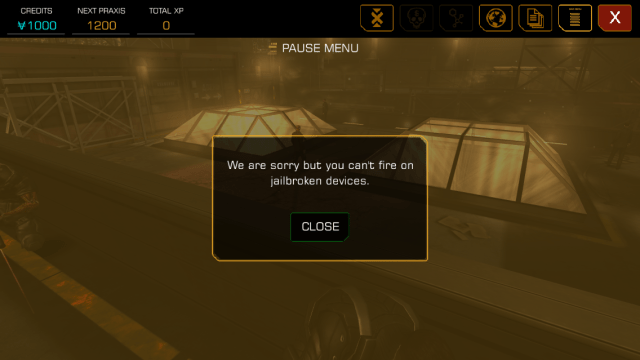 Remember that mobile app game, Deus Ex: The Fall, that nobody asked for? Well, turns out that if you bought it anyway and happen to have a jailbroken device, then you just spent $7 dollars on bupkis. Apparently you can’t fire any any guns on a jailbroken phone or tablet, including the necessary tranquilizer gun you need to complete the tutorial. Come on, Square Enix. Stop doing this to us. There’s only so many times we can make “I never asked for this” funny before we get really bummed out by how often we say and mean it.

As discovered by KipEnyan on Reddit last night, the game is effectively rendered impossible early on in the tutorial even if you were planning on a nonlethal playthrough. Several users in the App store have confirmed this as well.

While Apple claims that jailbreaking its devices leads to app piracy, the U.S. Copyright office has ruled that jailbreaking phones is not illegal. In fact, many people who jailbreak do pay full price for the apps they want. Apple, of course, will still void the warranty of any jailbroken device and refuses to offer support to jailbreakers.

“I paid good money for this game and Squeenix feels it’s okay to break my game because I prefer to customize my iPhone to my liking,” KipEnyan said in the related thread. “Jailbreaking was declared perfectly legal, so pulling shit like this shouldn’t be.”

Originally there was no warning that the game would not work under these circumstances, but Square Enix has since updated the Apple store page to alert new customers:

Please be aware, the Deus Ex: The Fall play experience is currently restricted on jail broken devices. Do not purchase if you have voided your warranty and have Jail broken your device.

As of now, it does not seem that Square Enix will do anything for those who have already purchased the game and can’t play it. According to user Ridiculosity on iMore, however, you can fix the problem by downloading XCon from Cydia, which will patch the app for you.

UPDATE: according to The Penny Arcade Report, Square Enix has reconsidered the jailbreak restriction and will be removing it in the next update, citing their regret that the restrictions were not properly mentioned in the first place:

We feel it is the right thing to do in this situation and apologize for any inconvenience this may have caused. No customer should be out of pocket when we were not clear from the start, so we’ll get the game updated as soon as possible so that everyone who wants to play Deus Ex: The Fall can do so regardless of whether their device is jailbroken or not.

(via Eurogamer, image via KipEnyan)