Can he swing from a web? WHO CARES? He's doing backflips! 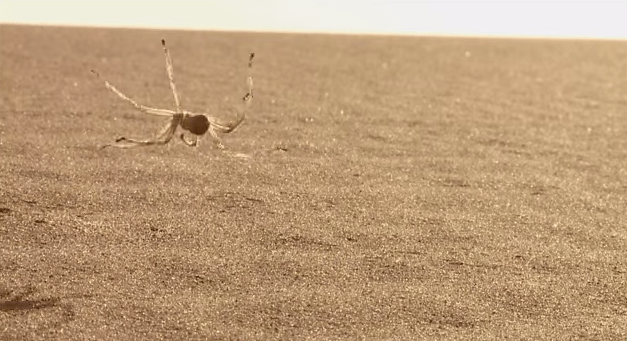 You know how in some action movie sequences, the protagonist somersaults away from their assailant’s attacks to show off how strong and agile they are, even though they could have just run away and it might have been faster? Apparently, that’s not just a stunt gimmick: it happens in nature, too. Namely, it happens because this spider does it all the time.

Nicknamed “flic-flac,” because that is obviously the onomatopoeia that Jon Romita would have used if it were Peter Parker in a ’70s Spider-Man comic, the Cebrennus rechenbergi is a nocturnal spider that lives in Southeastern Morocco and cartwheels away from predators during its hunt for food. It can move both uphill and downhill and can increase its speed from 3.3 feet per second to 6.6 feet while flipping. However, it can only do this between five to ten times a day, or it will die. Flipping your entire body is really hard work, after all, especially when most of your body is made of legs.

The bionics expert who first discovered the new species, Ingo Rechenberg, was inspired by its daring feets of agility to create a spider-like robot that performs close to the same. You can see both in the below video, though the spider itself doesn’t start jumping until 0:14.

As cute as the cartwheeling spider looks in motion, try to remember that it only does this to escape from danger, and that it also dies if it does it too much. Just imagine the spider screaming “AAAAAAAAH” the whole time to get the full effect. Or better yet: