I wonder if the genetically modified bacteria shoot the webs out of their wrists... 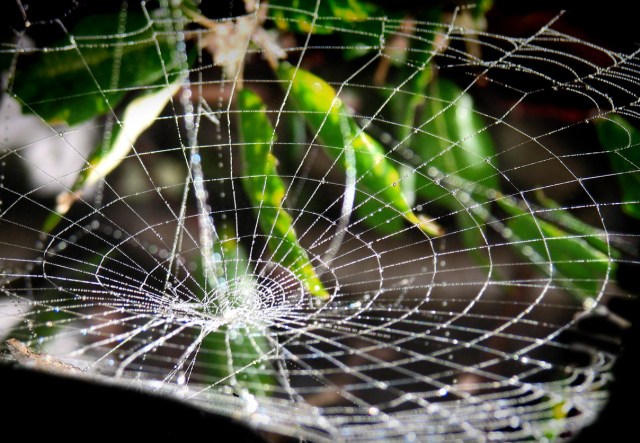 Like just about everyone, you’ve dreamed of swinging around like Spider-Man on your own webs while trying desperately not to think about how creepy that is. Well, now you… still probably shouldn’t, because you don’t have any super powers to help you out with it, but spider web may soon be a commercial material, so you’re welcome to try. Just don’t blame me when you fall from ten stories up.

Spider web, or spider silk, has a lot of advantages as a material. It’s super strong (up to five times as strong as steel) and incredibly durable (about 3 times as tough as kevlar), but it also has some disadvantages: it comes from probably the creepiest animal on the planet. Oh, and it’s incredibly hard to manufacture in practical quantities. Until now, that is.

If you’re imagining the horrifying scene from Amazing Spider-Man with the creepy spider farm, you’ll be happy to hear that method isn’t practical for commercial production. I can’t say for sure if they’ve tested its effectiveness in creating witty super heroes, which is probably great, but for now it doesn’t look like anyone’s going to be assembling chambers of spiders to create the material.

No, the method employed by startup AMSilk is much less nightmare fuel, unless, of course, you feel unsettled by the idea of genetically modifying bacteria so that it creates spider webs. Oh God. Invisible micro-spiders. What have we done? Deep breaths. Take deep breaths.

Anyway, yes, the startup AMSilk has succeeded where others have failed and gotten E. coli bacteria to produce spider silk, with genes from the European garden cross spider, in high enough volume that they’re able to produce it for commercial use. Actually, they already have. The silk has already been sold to shampoo and cosmetics companies, so good luck not thinking about pouring spider webs on your head the next time you’re in the shower.

Just don’t try to play Spider-Man and stop any trains with a couple of shampoo bottles. Right now, they’re just supplying it as an additive material to make your skin silky smooth and approximately 100% creepier.

Still, those other super-material applications are coming just a short ways into the future, so get ready, web-heads. “This is scalable technology,” AMSilk Managing Director Axel H. Leimer said to Chemical and Engineering News. “If someone ordered 1 ton, we could make it. We have already made a half a ton,” he says.

If you want to read more about AMSilk and real-world spider web production (including how the train-stopping scene in Spider-Man 2 is actually completely possible with real spider webs), check out the full story at C&EN. Anyone want to get together and start designing some web shooters?