Great, now I have to find someone to pick this chair up and take it outside. 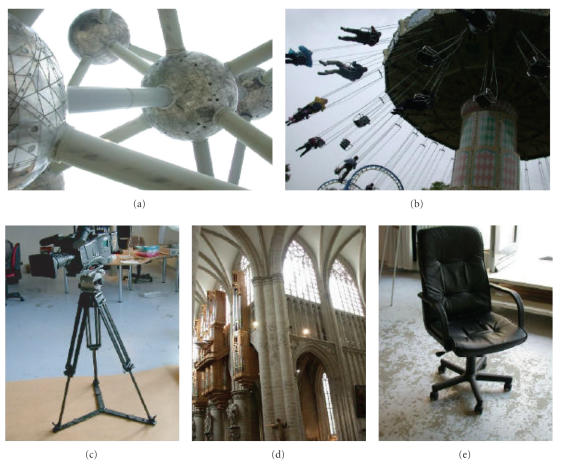 If you’re a chronic arachnophobic who’s avoided seeking treatment because you dread the brutality of exposure therapy, it may be possible to cure your fear without meeting millions of creepy crawlies — but you’ll never see tripods the same way again.

A study published in the National Library of Medicine way back in 2007 and then presumably hidden from the world by our spider overlords is gaining attention recently for “curing” arachnophobia with less physical exposure to patients’ deepest, darkest fears.

We describe a new arachnophobia therapy that is specially suited for those individuals with severe arachnophobia who are reluctant to undergo direct or even virtual exposure treatments. In this therapy, patients attend a computer presentation of images that, while not being spiders, have a subset of the characteristics of spiders. The Atomium of Brussels is an example of such an image.

Other “spidery” images (shown above) selected for the study included tripods, carousel swings and rolling chairs. Images were chosen because they mimicked the articulation of spider’s legs (if you just cringed then you know what I’m talking about) or for their resemblance to fangs. Thank you, science, for ruining amusement parks.

Patients in the control group were first presented with a slide show of spider-like images culled from the internet, and asked to skip any pictures that they found too unpleasant. The patients were then given a DVD of their selected images that they were instructed to watch twice a day, although not at times of emotional distress.

When watching the videos, patients were encouraged not to dwell on the arachnid-like features of the images. Explains the study,

To avoid the patient’s thoughts related to spiders while seeing the treatment presentation, the patient is given a question that should be answered at the end of the run, like “In how many images there is a rounded object?

At the same time the team also worked with a placebo group of patients, showing them only neutral, non-spidery images.

At week four of the study the placebo and the spider DVD group both showed no improvement, but at six weeks the group faced with rolling chairs and bowls of spaghetti (that’s vaguely spider-like, no?) demonstrated an ability to get closer to a physical spider than the group not being exposed to spider imagery.

However, after prolonged treatment the patients in the non-placebo group showed significant improvement:

A more substantial improvement was evident in the follow-up, six months after the conclusion of treatment: 91.7% of individuals in the treatment group and 90% of the treated placebo group were classified as nonarachnophobes.

How did the researchers  reach the conclusion that patients were “cured”? Test subjects were comfortable with petting a tarantula in a terrarium. I knew there was a catch.

Obviously this is an isolated instance in which therapy that didn’t include exposure to the actual phobia proved effective. The study’s results also place a  disconcerting amount of weight on cooperation of patients–although researchers attempted to monitor that the groups exposed themselves to the images as instructed, the control necessary to lend the study huge scientific weight was impossible.

However, considering the recurrence of interest in this research, it’s clear there’s a market for an arachnophobia cure that doesn’t require patients to get handsy with an eight-legged freak.

Everyone stare real hard at their chair legs right now and see if that helps.

(via io9 and A Spiderless Arachnophobic Therapy)