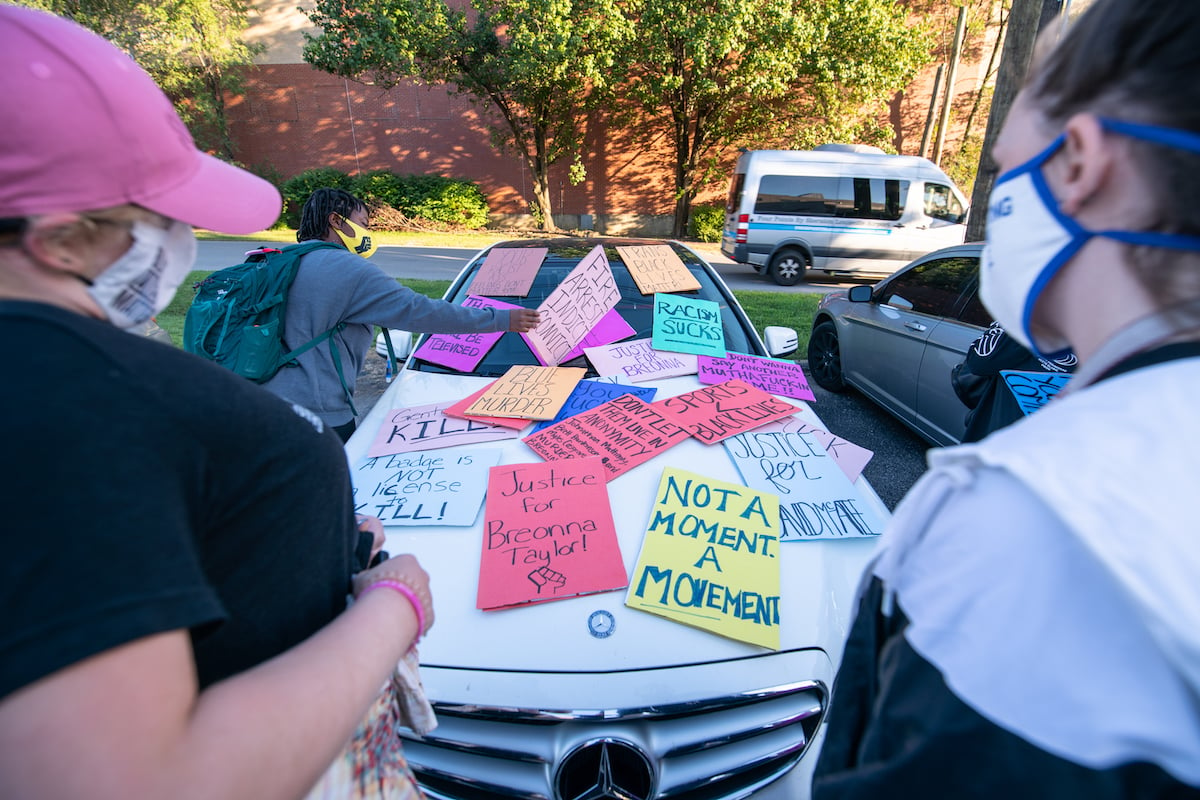 As protests continue nationwide nearly five months after the police killing of George Floyd, Republicans in office are still trying to find a way to vilify protesters and keep them from organizing.

Donald Trump, who once called himself “an ally of all peaceful protesters,” has since made it clear that he doesn’t believe peaceful protests are a thing that actually exists. Anyone expressing dissatisfaction with police violence, racism, and the Republican response to both get dubbed a dangerous “antifa” anarchist. He’s been sending federal troops into Democrat-run cities and has now labeled a number of those cities “anarchist jurisdictions” not deserving of federal funds.

Meanwhile, down in Florida, governor Ron DeSantis has proposed new legislation that essentially makes protesting a federal crime while barring local governments from decreasing police budgets and legalizing the act of running down protesters with a car.

A wild document. Felony collective punishment for anyone who attends a protest where property is damaged, while vehicular murder or manslaughter is effectively legalized. Plus if your city council acts to reduce the police budget, the state defunds everything. https://t.co/0scGoFd1XO

DeSantis’ bill increases penalties for anyone organizing, funding, or participating in a violent protest–which includes “violence” toward property–without seeming to make a distinction between those engaging in violence and those simply protesting peacefully while violence occurs. It also, of course, doesn’t address decades of research indicating it is the police’s actions that tend to escalate peaceful protests to the point of violence.

Among those increased penalties, anyone arrested at a “violent or disorderly assembly” will be denied bond or bail until after their first court appearance.

The bill also criminalizes “harassment in public accommodations”–i.e. yelling at people at restaurants.

Most troubling, though, is DeSantis’s proposal that a “driver is NOT liable for injury or death caused if fleeing for safety from a mob,” while it would be a third-degree felony to block a roadway or obstruct traffic during an “unpermitted protest.”

Vehicular attacks have been a terrifyingly common occurrence during the recent protests. In the first six weeks of protests following Floyd’s murder, there were 66 incidents involving protesters being struck by vehicles. The death of Heather Heyer in Charlottesville, killed by a neo-Nazi who drove his car into a crowd of protesters, was definitely the most high-profile instance of this kind of violence, but vehicular assault has been a favorite tactic of the right for years, with memes encouraging the act flooding their not-so-dark corners of the internet.

The obvious defense of this part of the bill would be that it only applies when the driver is trying to flee, not when they’re attacking protesters. But as we’ve seen recently with the narrative around Kyle Rittenhouse, the teen charged with shooting multiple people in Kenosha, Wisconsin, many conservatives are quick to automatically label attacks on protesters as self-defense, even when they are obviously nothing of the sort.

Today a GOP Senator released an ad jokingly (?) endorsing killing liberal journalists, and Ron De Santis introduced a bill in Florida making it legal to run over protesters with your car. So it’s not just randos in line at rallies. https://t.co/hhaVm1TqX4

Some politicians will go to any lengths necessary to deny their constituents their constitutionally protected right to protest before they will think to give any time or space whatsoever to address the reason for those protests.