The U.S. Department of Education is Cutting Back Its Civil Rights Investigations 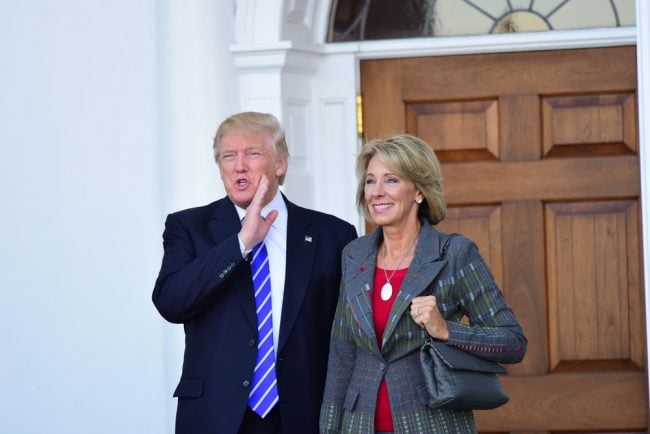 To wish everyone a happy Juneteenth, nightmare lady Betsy Devos will oversee what The New York Times describes as a “scaling back” of civil rights investigations in the Department of Education. Luckily, those pesky ol’ checks and balances may get in her way – eventually. That’s because the United States Commission on Civil Rights, an independent and bipartisan federal agency whose members are appointed by both Congress and the president, has opened a two-year investigation into whether the Trump administration is duly protecting and enforcing Americans’ civil rights.

First, the nightmare. ProPublica posted an internal memo from Candice E. Jackson, the acting head of the Department of Education’s office for civil rights, which lays out changes to the way the office will handle some types of complaints. In sum, officers of the department are no longer advised to expand certain types of individual investigations – such as those that deal with complex issues, or rights that haven’t been fully legislated yet – to look for wider, more systemic problems. Under the Obama administration, the guidelines recommended that investigators request at least three years of university, school, or district records when investigating a complaint of this nature. These records helped to identify patterns of discrimination that might not be apparent in an individual case – for example, in the treatment of sexual assault at universities, or in a school district’s racist assignment of detentions and suspensions.

Under the new guidelines, three years of records will no longer be required. As the Los Angeles Times summarizes, officers are instead directed to “look into broader patterns of noncompliance only when a complaint explicitly mentions that such broader patterns are possible.”

Now, in fairness to Devos, the Office for Civil Rights currently faces a sizeable backlog, and both complainants and schools have criticized the length of the investigations. Reducing the records requirement could help them to process more clear-cut cases faster and thereby speed up overall processing time.

However, I might buy that explanation if this didn’t so clearly fit a pattern. Devos infamously refused to say that she would stand up for LGBTQIA students, her department has dropped a number of transgender students’ cases, and Trump wants to slash the budget for the office of civil rights. The Department of Justice is similarly cutting back on its enforcement of civil rights. If this were really about helping victims of discrimination to get justice more quickly, none of the above would be true.

However, there’s a small, small light at the end of this tunnel. The United States Commission on Civil Rights – an independent and bipartisan federal agency whose eight members must be split evenly by party and are appointed by the President (4), Senate (2) and House (2) – has launched a two-year investigation into the Trump administration’s civil rights enforcement. In its statement, the Commission referenced a number of issues, from the presence of ICE officials in courtrooms to Devos’ obvious refusal to assert the rights of students. However, they also pointed to Trump’s proposed budget, stating that “proposed cuts would result in a dangerous reduction of civil rights enforcement across the country.” I recommend you read the whole statement; it was heartening for me, since it echoed so many of my own concerns.

The investigation will present its findings to Congress in 2019, after the crucial 2018 elections in the Senate and House of Representatives. If the Democrats control either body, they will have some power to act on the Commission’s findings.

If Republicans still hold the majority, though, I won’t hold my breath for action on behalf of America’s students.