Deathstroke To Be Playable With Arkham Origins DLC 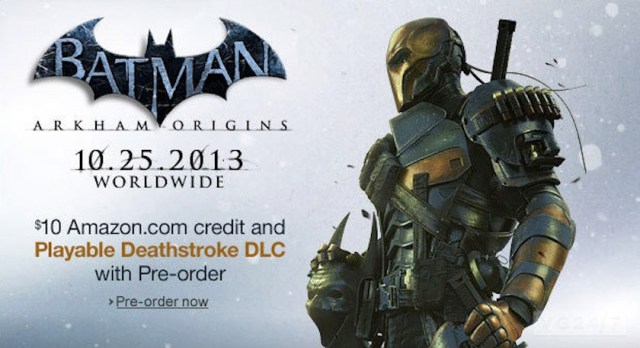 Since I’m a rational, right-thinking person, it should come as no surprise that the last two Batman games — Arkham Asylum and Arkham City — rank among my favorite video game offerings in recent memory. With Rockstar giving up development duties for the series, though, my excitement for Arkham Origins has been tempered. The fact that one of my favorite DCU villains — the assassin and Dark Knight arch-rival Deathstroke — will be playable in the upcoming title, could change that. All of a sudden, that teaser vid for the title we were so excited about makes way more sense, so congratulations, Arkham Origins: I am officially psyched for you to come out.

While I have pretty mixed felings on DLC in general — and on buying new games in particular, which doesn’t make much sense for me considering how many great older titles I haven’t played yet — you can color my attention got on this one. New DLC isn’t usually going to be a thing that sells me on a game. Then again…come on, it’s Deathstroke.  As for whether I’ll go so far as to pre-order it…well, it’s a foregone conclusion that I’m going to play Arkham Origins. If the previous two titles in the series are any indication, in fact, I’m going to play the pants off of it before sending it across the country for my dad to play.

So I guess the real question is if I want to play the game as Deathstroke, a question best addressed by the following sentence: “Duh, yes, that times a million.” There’s still no detail on just how playable the DCU’s favorite master mercenary will be, but whether its just a few levels or a whole new way to explore Akrham Origins (honestly, that feels like a little much to ask) it’s definitely an add-on that has me contemplating pre-ordering a game.

Since that’s more or less unheard of, I’m apparently pretty impressed by this. Like, more than I expected to be. Apparently, I have underestimated how badly I wanted to control a digital Slade Wilson. Which I guess means it’s time to give Injustice a shot after all.