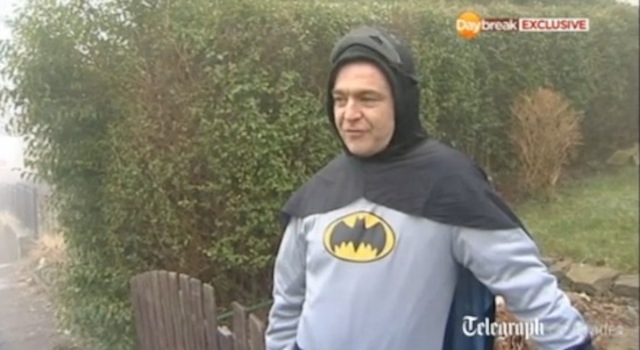 Feel like some news that doesn’t involve a chain of human misery that seems to stretch out past the horizon and into the infinite? Yeah, us too. In the interest of that, Batman got arrested for burglary over the weekend. Well, not the real Batman, but Brit Stan Worby, who you may remember as the cape and cowl clad crusader who in February of this year caused a stir by dropping off a suspected criminal at a police station while dressed in full Dark Knight regalia.

To be fair, we all should have known that this guy was no real Batman when he walked a criminal into the police station. Batman doesn’t just stroll around with that cowardly and superstitious lot and escort them into the waiting hands of the police. Batman leaves them beaten senseless and hanging upside down from a convenient lamppost. Granted, this is not the safest practice, but there’s an image to maintain.

We definitely know that Worby is not Bat-material now that he has been arrested in the company of the very same criminal he once turned in, 27-year-old Danny Frayne, with nearly $1,200 worth of power tools allegedly stolen from a nearby garage.

You’re not Batman, Stan Worby. You’re not even Die Fleidermaus.