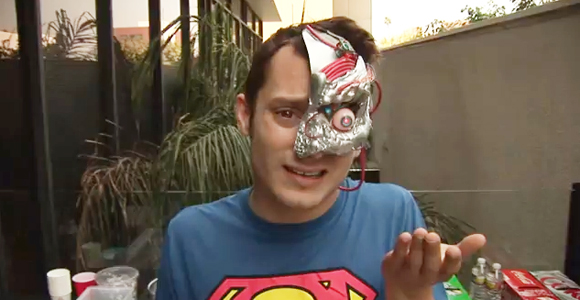 The Death and Return of Superman is “a somewhat-mostly-accurate educational parody film,” according to its creators. Those creators? Bryan Basham and Max Landis, the son of famed director John Landis. This is a video comic fans will get very excited over (whether positively or negatively) and that non-readers will get a kick out of because it’s so ridiculous it couldn’t possibly be true. Except it kinda is. It also includes cameos from Mandy Moore, Elijah Wood, Chris Hardwick, Simon Pegg (as John Landis) and one more extra special appearance I don’t want to spoil. Give it a watch.

Even though it sounds as if he’s completely trashing the genre, you could say the younger Landis has a keen interest in superheroes. He wrote the screenplay for the new film Chronicle, which revolves around a group of teenage boys who find themselves with superpowers.

“I’m not drunk in the video, I only get about three cups in,” writes Landis. “The original rant was 45 minutes long, so of course we had to cut a bunch of stuff out for time, and because it was just too stupid. Like for instance the part where Pa Kent dies of a heart attack and literally GOES TO HEAVEN. AND SEES SUPERMAN.” Yeah, that also happened. He also neglected to include the real impetus for the 1992 Death of Superman storyline. That was Lois Lane and Clark Kent’s marriage in the comic being put on hold to coincide with their marriage on the ABC television series, Lois & Clark: The New Adventures of Superman and the creators needing another big event to take its place. Yes, true story.