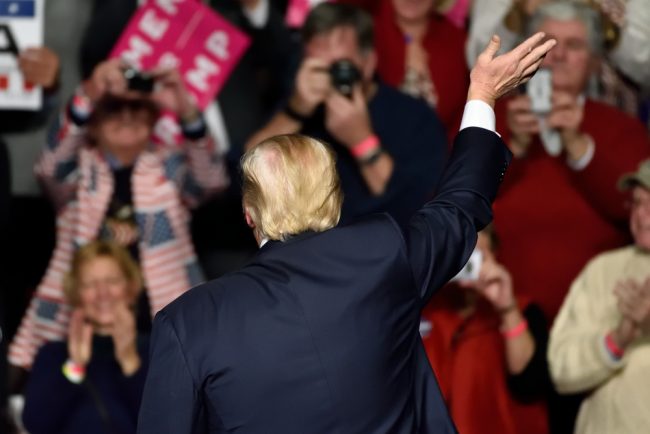 Yesterday, the New York Times published an op-ed titled “I Voted for Trump. And I Sorely Regret It.” If you’re already rolling your eyes at that headline, oh just wait.

The piece isn’t just written by a Trump voter, by the way. It comes from Julius Krein, who, last February, founded American Affairs, a pro-Trump website designed to give his campaign “intellectual heft.” He’s been called, in all earnestness, “Trump’s wunderkind.” This man didn’t just cast a single vote for Trump, he worked hard to legitimize his entire campaign.

So now that Krein has finally realized his “optimism was unfounded,” you’ll have to forgive me for not giving one single shit.

Krein throws out some examples of things he couldn’t possibly have been expected to know would be bad for America, including Trump’s “needlessly inflammatory” statements on immigration. Funny, I seem to remember a whole lot of people foreseeing those as being dangerous. The same goes for those typical politicians’ “strict ideologies” he eschewed. We call those “The Constitution” and “civil rights & liberties.”

Krein wrote about the denial he was in before and since the election, which he sees so clearly now. “For months, despite increasing chaos and incoherence, I have given Mr. Trump the benefit of the doubt,” he writes. “’No, I don’t really think he is a racist,’ I have told skeptical audiences. ‘Yes, he says some stupid things, but none of it really matters; he’s not really that incompetent.’ Or: ‘They’ve made some mistakes, but it’s still early.'”

Now, he concedes, “It’s no longer early. Not only has the president failed to make the course corrections necessary to save his administration, but his increasingly appalling conduct will continue to repel anyone who might once have been inclined to work with him.”

To which literally everyone who saw this coming from the very start replied:

You don’t get a fucking cookie for being sorry now that you contributed to the growing chemical fire that is the state of our country. You supported a candidate because he told you you would rise up by stomping down many, many others, and now you’re surprised that that vicious ideology is affecting your life too? No one is going to wipe away your tears and thank you for allowing us to see them.

If you voted for Trump, we don’t want to hear about your regret. Save your breath. https://t.co/ZPNed5pnQM pic.twitter.com/l8Tah1nzYN

I'm truley sorry I voted for Trump. I only wanted disabled kids to lose their Medicaid ;I didn't want people to know im racist

"I was curious. I wanted to roll the dice and shake things up. Now I sorely regret it." -Trump voter/Jumanji player

For every piece by a Trump voter who "didn't see this coming," how about one by a woman and/or person of color that just says WE TOLD YOU SO

What’s possibly even more amazing and maddening than these “I was so wrong” pieces are the “How could we possibly have known??” people.

In Retrospect: Is There Anyone Who Could Have Predicted Where We Are Today? https://t.co/wO67efq5sh

I’m sorry, WHO COULD HAVE PREDICTED THIS? That’s a serious question?? Gee, let’s start with:

1. Hillary Clinton. 2. Everyone who voted for her.

Redstate: Anyone? Anyone at all?
66m voters: WE DID
RSe: No one, then?
66m voters: HEY ASSH–
RS: I wish someone had. Can almost hear them.

To anyone who actually feels bad for voting for Trump: good. You should feel bad. Because it was not unforeseeable, and you had to ignore a hell of a lot that the rest of us were standing here, waving our arms, and pointing at for a good long while.

If you’ve realized the error of your ways, that’s a fine start, but you don’t get praise or sympathy and the New York Times sure as hell shouldn’t be letting you believe otherwise.