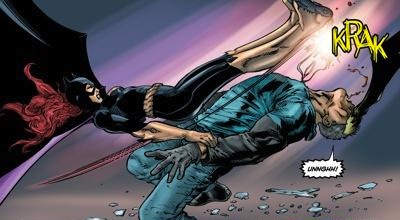 Well, everybody, hope that your comic store ordered enough of Grant Morrison‘s Superman and Gail Simone‘s Batgirl, because they canst orda’ no more (uh, that’s a Popeye joke, not a typo. Maybe not the clearest thing I’ve ever written). On the final day on which retailers would be able to order copies of the second round of the DCnU #1s, it seems that they are anticipating a lot of demand for Clark Kent and Barbara Gordon’s first appearances in the DCnU, as well as for the second printing of Justice League #1, despite mixed reviews.

To clarify, this does not mean that you’ve missed your chance to get the books. Here’s what it does mean:

The way DC (and Marvel, and a lot of other) comics are sold in America works like this: Diamond Comic Distributors prints a run, and your local store tries to their best to order exactly as many comics as they will sell, no more and no less. See, if they order too few, customers will be unsatisfied and may go elsewhere. If they order too many, they take a loss. Unlike the book publishing business, where stores can return unsold books for credit with a publisher, Diamond does not take unsold comics issues back. This is where the business of searching for and buying back issues comes in: the grand majority of those back issues are not sold for their “sticker price.” It’s the uncommon few that actually get marked up after their release date, and those are usually variant covers, #1 issues, the occasional misprint and other rare titles.

Whether the fact that these titles are sold out because they are #1s, variant covered reprints (in which, by the way, Wonder Woman remembered to put her on-again-off-again pants on), highly anticipated, or the subject of much controversy is not something that will probably ever become clear. What we can draw from it is that comic retailers are anticipating that the books will sell well, and since it doesn’t monetarily matter at all to DC whether stores actually sell all the books that they order (only that they order a lot of books), this is the DCnU “doing well” in a sense.

Also, perhaps that if you don’t have a copy of them reserved you shouldn’t be too late in picking one up. Otherwise you’ll be waiting for the already confirmed second printings of Action Comics #1, and Batgirl #1, not to mention the third printing of Justice League #1. Come on people, at that point you could wait a week and pick up a digital copy of the thing for a dollar less.