Everything We Know About The CW’s “Elseworlds” Crossover (With Bonus Legends of Tomorrow!) 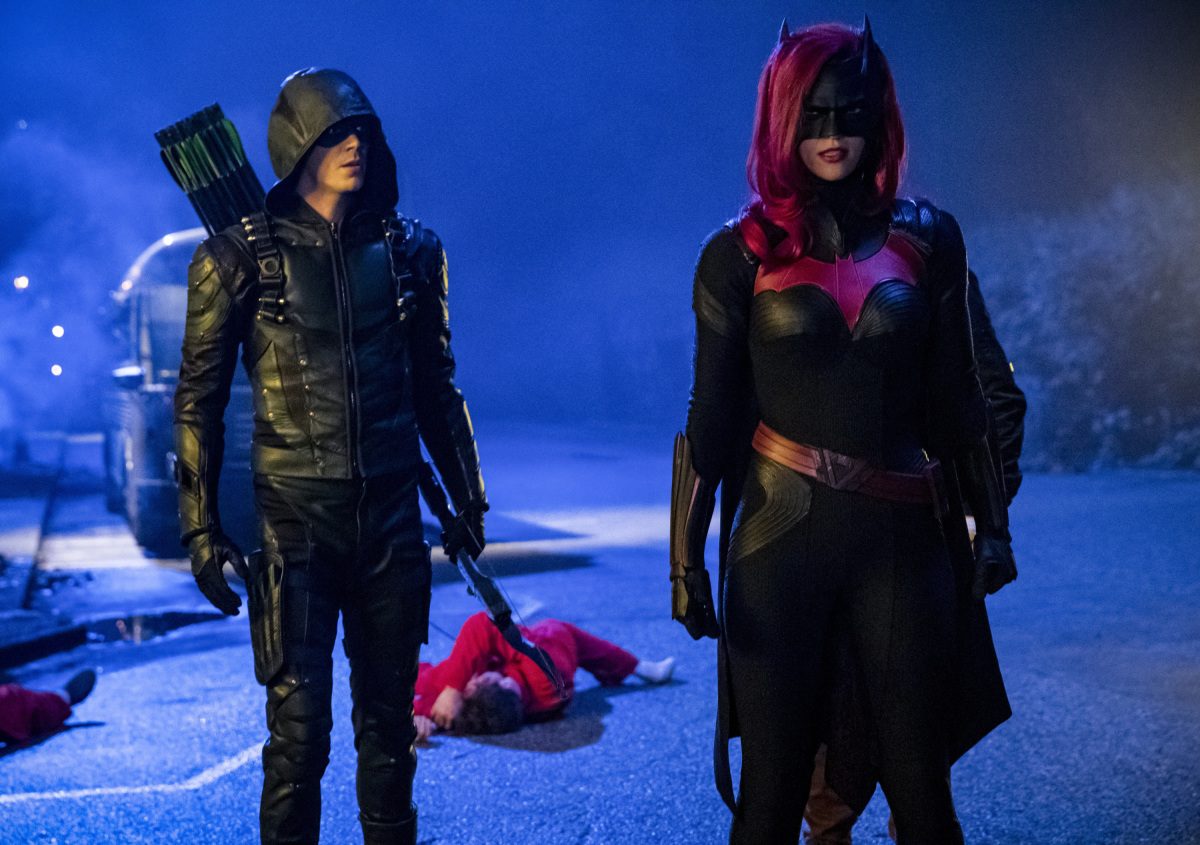 We’ve been excited about this fall’s Arrowverse crossover event since San Diego Comic-Con, when it was announced that Batwoman (Ruby Rose) would be introduced during the event. As the big day draws closer, we’re rounding up what we know, what we guess, and what we’re excited about in the three-part adventure.

Things start over on The Flash (which will swap nights with Supergirl for the event, and thus air on Sunday, December 9th), when Barry Allen (Grant Gustin) wakes up in Oliver Queen’s (Stephen Amell) body and life, and vice versa, and no one notices the difference, not even Team Flash. The boys eventually seek out the help of their super friend Kara Danvers (Melissa Benoist), who calls in her cousin Superman (Tyler Hoechlin) and Lois Lane (Elizabeth Tulloch) for backup.

Of course, it’s not all that simple, and the gang ends up meeting all sorts of alternate versions of their friends and foes, including Rose’s Batwoman and John Wesley Ship as the Flash from a different world. Who’s behind all this multiverse madness? A villain called the Monitor, played by LaMonica Garrett.

For those of you who, like me, don’t know a lot about the comic book source material, here’s the deal: The Monitors are the guys that, uh, monitor the Multiverse, and when one goes rogue, it can lead to quite a crisis. With different worlds folding into each other, things are going to get crazy … but according to the cast, they’re also going to get pretty fun.

“It was the most fun that I’ve had maybe ever throughout the course of doing the show,” Said Amell, when speaking to press about the crossover in Vancouver. “This feels like … the best example of us just embracing the fun of it all and embracing all of the opportunities that we have. because of all of the things that we’ve had a chance to do over the years.”

According to Benoist, this was also the most fun she’d had on a (non-musical) crossover: “It really was the triad, so to speak—the three of us. And Kara plays a really fun role in this dilemma that Barry and Oliver find themselves in … And it’s really comedic, the whole thing. I think people will really get a kick out of it.”

That body switch in particular was a lot of fun for Amell and Gustin to play, but also a challenge. “Because he has my learned abilities, and I have his superpowers,” said Amell. “There are elements of each other’s personality that each of us have to embrace in order to be successful at the mission that’s in front of us. So, every once in a while, I’m channeling my inner Barry Allen, and I’m looking at Grant after the take going, ‘Is it too much?’” 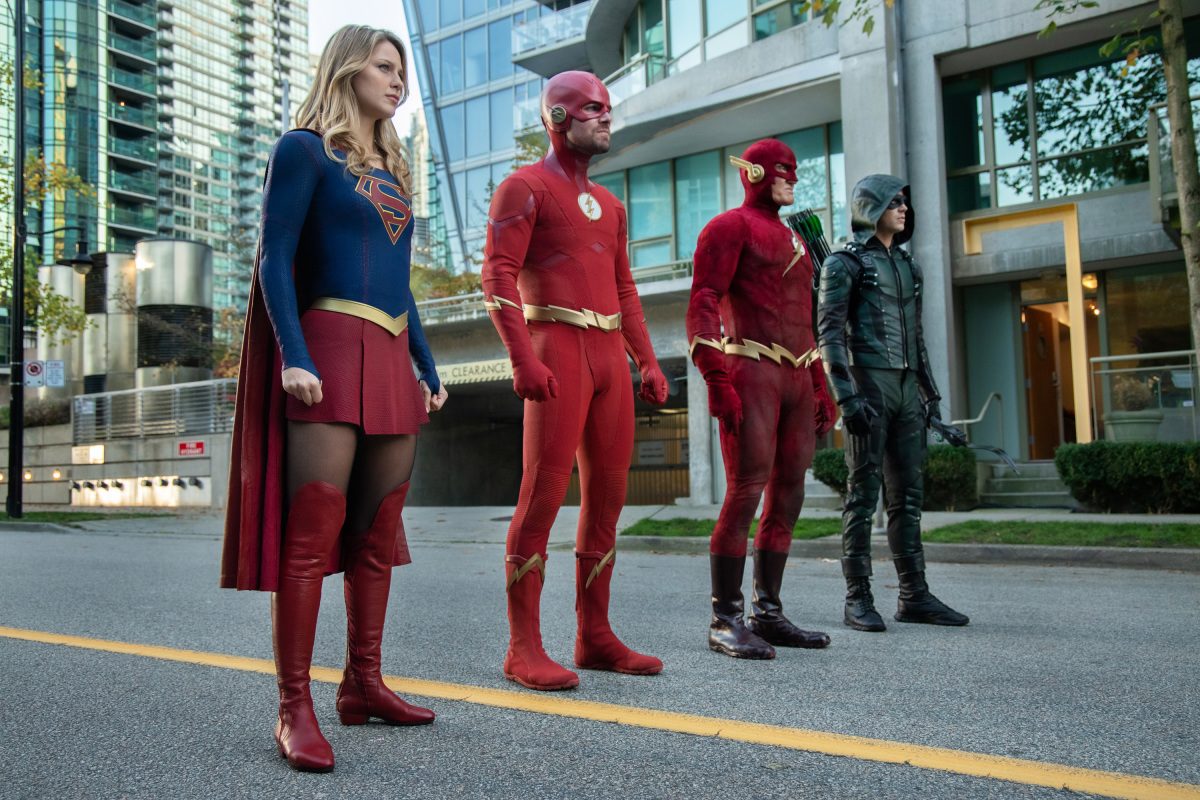 While we’re excited to see Oliver and Barry swap out, it’s Kate Kane that many of us can’t wait to get to know better, and the cast gave us reason to be excited. “Ruby Rose just killed it,” said Benoist. “She is so perfect for this role.”

It also sounds like Supergirl and Batwoman will get along pretty well. “Their scenes are really nice because of their similarities,” Benoist shared. “Kate Kane is Bruce Wayne’s cousin and all these things, so they really relate on a lot of levels that I don’t think Kara’s found yet in another female superhero. There’s a really deep understanding from the get go between the two of them.”

Amell, too, had nothing but praise for Rose and excitement for the ever-expanding Arrowverse: “It was great. The idea that we get to go to Gotham City is really exciting … Ruby’s fantastic; I think she’s going to do great. I’m all for expanding the universe, right? Every time. Always. There’s no scenario where I go, ‘No, thank you.'”

In the three-hour event, we’ll see a lot of familiar faces in new ways, like Mechad Brooks as a criminally inclined Jimmy Olsen, the return of John Barrowman as a cop, and new characters to the Arrowverse, like Nora Fries (Cassandra Amell) and Jeremey Davies as Dr. John Deegan, who might be the key to fixing this mess … but he does work at Arkham, so it might not be easy getting to him.

Absent from the crossover this year is DC’s Legends of Tomorrow, but it sounds like the crew of the Waverider is going in an entirely different direction and crossing over with … themselves. The two-part midseason finale starts tonight and will see Constatine (Matt Ryan) and Charlie (Maisie Richardson-Seller) causing a whole bunch of chaos.

Remember that the warlock trapped shapeshifter Charlie in his lovely but limited form, and Charlie wants her powers back. Constantine needs help from Charlie to deal with a demon from his past and promises to fix her in exchange.

With a mutually beneficial deal set up, “They come together to try to make this happen,” Richardson-Sellers told us, “and in doing so, alter the timeline, which Charlie realizes is catastrophic.” How catastrophic? It “leads us to have multiple realities which is a fantastic, hilarious two episodes where they’re spinning out in time together,” Richardson-Sellers spilled. “Constantine and her have basically screwed up the timeline.”

In true Legends fashion, the dire consequences are more hysterical than horrifying. “It’s hilarious,” Richardson-Sellers said. “Every act you basically see the Legends in a different form. “It’s just this mad mad journey throughout time, and thinking you’ve fixed it, and they’re in a completely different universe because one thing has changed.” These various forms might include cat form, since episode eight is called “Legends of to Meow-Meow,” but it will certainly include … puppets.

Yes, you read that right. While Green Arrow, the Flash, and Supergirl are fighting interdimensional evil, the Legends will be made of felt. It’s not unprecedented, considering we saw the puppet version of the dearly departed Professor Stein show up last season, and we’ll see him again in this episode.

According to Richardson-Sellers, “Puppet Stein is not necessarily a goodie.”

As Jes Macallan (Ava Sharpe) put it, the puppets were not the best co-stars: “They’re really cute, but they’re horrible to work with. The puppeteer’s a diva. There’s a fluffer for the puppet.” That’s not sarcasm, guys. Puppet fluffer is a real job, so stop snickering.

From body swaps to new heroes and seeing our favorites as puppets, December 9, 10, and 11 are going to have some seriously fun television treats for us.