DC Is Launching New Graphic Novel Imprints for YA and Young Readers, and One of the Titles is Superman Smashes the Klan 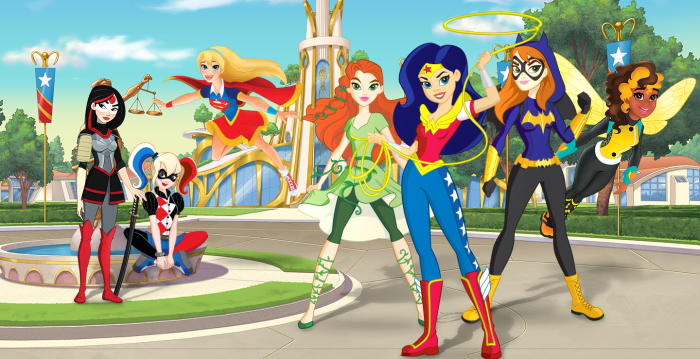 We previously wrote up DC’s forthcoming Young Readers imprint of graphic novels, but now The New York Times is reporting that they’re actually launching two distinct new imprints this fall. DC Ink will be aimed at young adults, with books about Harley Quinn and Mera as its first two titles. DC Zoom will be aimed at middle school readers, and its first title will be DC Super Hero Girls: Search for Atlantis, by Shea Fontana and Yancey Labat.

You probably noticed that all three of those graphic novels were about female heroes, and that’s no coincidence. It’s a strategic response to the demographics of middle-school and YA readers. “If you look at readership in middle grade and YA,” said Michele Wells, DC’s vice president for content strategy, “in general, you’ll see a swing on the side of female readers.” Imagine that! Treating female characters as the bulwark of a line, rather than optional add-ons!

While I definitely find the female-first emphasis of DC Ink and DC Zoom is refreshing, DC is also producing books to inspire and engage young male readers. For example, Ridley Pearson, the writer of the Kingdom Keepers series, will be writing a “Super Sons” graphic novel about Jonathan Kent, the son of Superman, and Damian Wayne, the son of Batman.

(Also, y’know, kids can read books about heroes who don’t share their gender. Clearly. But I am glad they’re making the active effort to court younger male readers, who struggle more with reading, on average, than their female counterparts.)

Other forthcoming titles will be written by well-known YA and middle-grade novelists like Laurie Halse Anderson (Speak), Melissa de la Cruz (the Descendants series), and Michael Northrop (TombQuest).

Perhaps my favorite part of this announcement was the tidbit that Gene Luen Yang (American Born Chinese, Boxers & Saints) is working on a Superman book titled Superman Smashes the Klan. Wells said that this series, which will start out as a serial before being collected in a trade, is meant to appeal to both traditional weekly comics readers and the more diverse audience for graphic novels. “If anyone can make a bold statement with Superman, it is Gene Yang,” Wells said.

Plus, Superman previously fought the Ku Klux Klan on the 1940s radio program The Adventures of Superman, and he’s also historically been used to promote diversity and fight xenophobia in American schools.

If you’d like to hear more about Superman’s first clash with the Klan, this video from NerdSync includes a great history, as well as amazing dialogue from the radio program, like one of Superman’s closing lines: “Remember this, as long as you live: whenever you meet up with anyone who is trying to cause trouble between people, anyone who tries to tell you that a man can’t be a good American because he’s a Catholic, or a Jew, or a Protestant, or whatever, you can be pretty sure he’s a rotten American himself. Not only a rotten American, but a rotten human being. Don’t ever forget that!”

(Via The New York Times; image: DC and Warner Bros.)