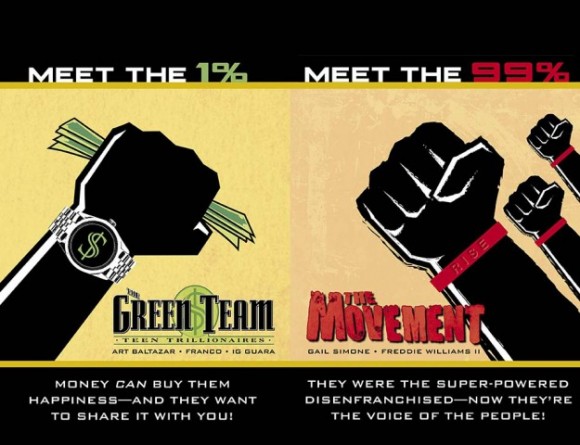 Gail Simone was teasing a new project on Twitter yesterday but I’m sure no one guessed this one correctly. Simone and Freddie Williams II will produce, The Movement, focusing on the 99% of the DC Universe while Art Baltazar, Franco, and Ig Guara will team  to represent the more affluent 1% in The Green Team. Sound familiar?

If the 1% vs. 99% thing rings a bell, it should. It’s part of the slogan used by the Occupy movement where people like Bruce Wayne and Lex Luther would have had a spotlight if they were real. But is that who we’ll see in the companion books? Here’s the official solicitation for The Movement #1:

We are faceless. We are limitless. We see all. And we do not forgive.
Who defends the powerless against the GREEDY and the CORRUPT? Who protects the homeless and poverty-stricken from those who would PREY upon them in the DARK OF NIGHT?
When those who are sworn to protect us abuse their power, when toxic government calls down super-human lackeys to force order upon the populace…finally, there is a force, a citizen’s army, to push order BACK. Let those who abuse the system know this as well: We have our OWN super humans now. They are not afraid of your badges or Leagues. And they will not be SILENCED.
We are your neighbors. We are your co-workers. And we are your children.

INVENTORS! EXPLORERS! ADVENTURERS! Do you need money to finance an important project? Then you should set up a meeting with THE GREEN TEAM!
• Nature of world-changing idea:
• Amount requested:
• Does your project have the potential to:
Fracture space-time?
Replace the combustion engine?
Attract extraterrestrial attention?
Prove/disprove existence of deities?
Piss off The Justice League?
Render the human body obsolete?
If any of the above are checked, please fill out liability release form GT2013-05. Send any 82 drawings, plans, models, or photos with request.

So, not quite the specifics you were hoping for. Bryan Young was able to speak with the creators about the project for Huffington Post and has the full interviews on Big Shiny Robot.

“The Movement is an idea I’ve had for some time. It’s a book about power–who owns it, who uses it, who suffers from its abuse,” said Simone. “As we increasingly move to an age where information is currency, you get these situations where a single viral video can cost a previously unassailable corporation billions, or can upset the power balance of entire governments. And because the sources of that information are so dispersed and nameless, it’s nearly impossible to shut it all down.”

Simone didn’t name any characters in the interview but said The Movement would be an adventure story with some dark humor, and that it feels like a “very new kind of superhero book.”

“We’re not trying to preach platitudes at people. I happen to love superhero comics, especially the crazy glamor and thrills they contain,” she said. “But on the other, I think the backdrop is a slice of reality that we’re unlikely to see in most superhero books. And I find that tremendously exciting.”

On the other side of the coin, Tiny Titans creators Baltazar and Franco said DC knew their sense of humor would be an important element of The Green Team and mentioned Superman and Wonder Woman but not in a specific context. Of course the focus of their book is money and power.

The companion books are set to be released in May. Both have covers by Amanda Conner and varient covers by Cliff Chiang. In other DC news, Deathstroke, Hawkman, Team 7, Firestorm, Ravagers, and Sword of Sorcery have all been cancelled.