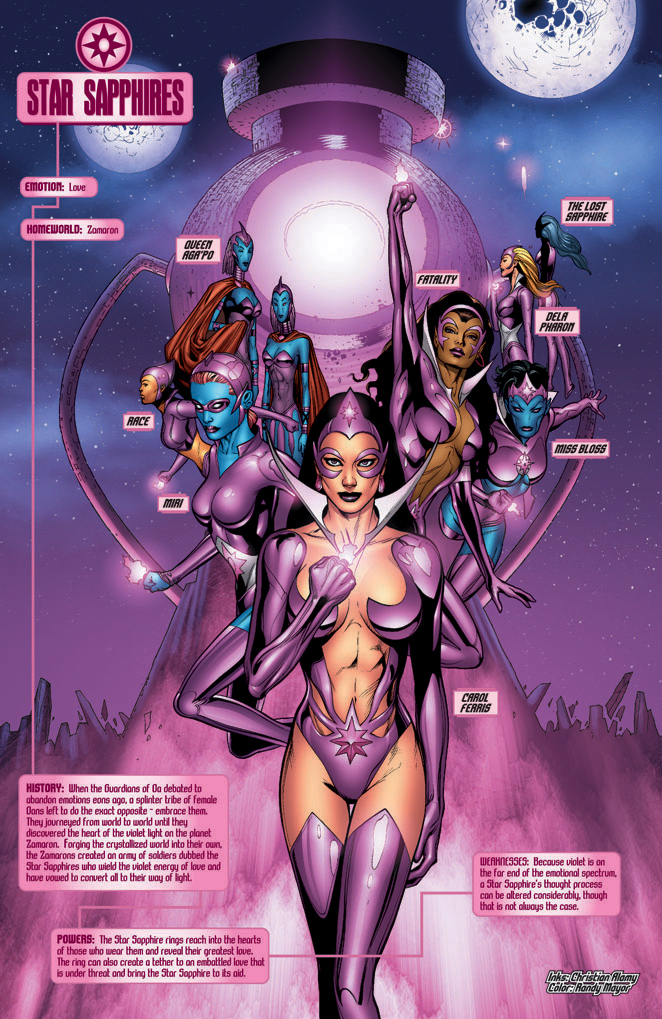 And this is where I kick myself for being 3-4 issues behind on my DC Comics books. Spoilers to come for Green Lantern Corps #36.

Here’s the official summary of the issue:

“Godhead” Part 8! Continued from GREEN LANTERN (2011) #36! With Hal Jordan missing, John Stewart must take control of the Green Lanterns and rally the Indigo Tribe, the Red Lanterns, and even the Sinestro Corps to work together. Continued in GREEN LANTERN: NEW GUARDIANS #36!

The question had been floating many times – could a male of any particular species be a Star Sapphire? One of the rainbow corps, the Star Sapphires’ modern history has them as wielders of love of the emotional spectrum. Their rings can create hard light constructs like the other corps but also have the ability to detect when love is actually in danger, creating a tether which drags them to the location. Star Sapphires are also know as one of the more extreme corps.

Longtime Green Lantern writer Geoff Johns went on the record in 2009 to say “anyone can join [the Star Sapphires], but most men are not worthy” but it looks like a new contender has entered the ring. Yup. John Stewart. And yes, he’s wearing far too many items of clothing for a Star Sapphire. Of course as you can see in our top picture, not all Sapphires wear gravity defying costumes but let’s face it, most of them do. Actually, most people figure male Sapphires should wear something like this (warning for BUTT).

Guy Gardener, Superman Prime, and Krona have technically wielded the Star Sapphire rings before but it looks like John is set to be the first one to actually carry it for any extended period of time. Writer Van Jensen and artist Bernard Chang spoke to IGN about the big change. Chang said of the costume:

There was actually a handful of different designs that I had submitted, some that were more based on his Green Lantern outfit but had some pink accents to it — even a hybrid of both — because he still had the Green Lantern ring on at the same time. There was even one where he was almost shirtless, because the Star Sapphires don’t have a lot of clothing on them. So I thought maybe John would be pseudo-shirtless and half-naked. But at the end we ended up going with this. It’s a little more. A lot of the lines are pretty jagged. I think that has something to do with the recent turmoil that he’d experienced. But the green energy is still very fluid on his exterior. So I think there’s a nice counterbalance, ultimately, with the final design that is uniform but exudes energy.

And Jensen had this to say about John’s love connection:

Love is an emotion that leads people in many different directions, but it can lead you to being very intensely passionate or intensely violent. It’s just a lot more sharp-edged.

So I think it really says a lot to where John has been as a character. It’s almost like these raw nerves that have been exposed, that he’s been struggling to deal with. So in a lot of way he has for a long time been cover up or hide his emotional side. This in many ways is him coming to grips with the fact that he can’t just be this taciturn dude. He has to embrace the emotional aspects of his character that are really present, going back to the origin of when he became a Green Lantern.

So, what do you think of John as a Star Sapphire?

(image and story via io9)