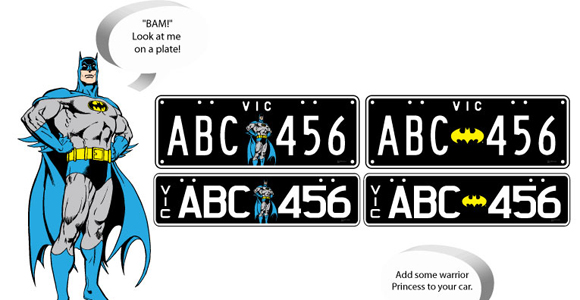 Sometimes awesome things are only available in certain areas of the world. And sometimes, I cry myself to sleep about it. This is one of those times. Available November 30, only in Australia, classic DC Comic Superheroes license plates. And no, I am not the one responsible for Batman’s awesome caption bubble.

The new designs were created by Vic Roads Custom Plates in Australia and feature classic images of Batman, Wonder Woman, Superman, Supergirl, Green Lantern and the Flash (sorry Aquaman). According to their website, “The DC Comic plates will be available as an upgrade to your existing 3×3 (General Issue) plates and available from $195* (Slimline an additional $30 per plate).”

While we applaud them including two female characters in their line, does one of them have to be flaunting that she gets pink plates? This is why I always tell people Supergirl needs a slightly different “S” than Superman. (Reverse the colors! Done!) At least the Flash makes a good point, even if he does get the short end of the stick with only one design.

Which one would you buy (if you could)?