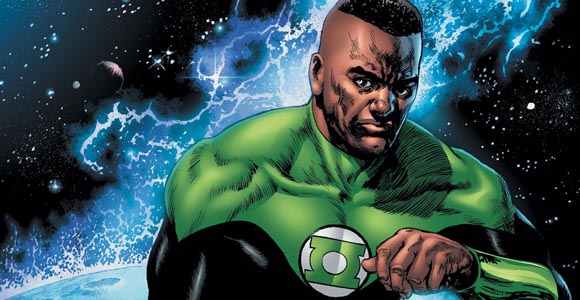 Character deaths aren’t an unusual thing in comic books but a huge nerve was hit yesterday when it was revealed DC Comics was planning to kill off Green Lantern John Stewart. The news came out amidst two more DC writers stepping off their new titles before any issues hit stores. Hit the jump for reasons, rumors, and more.

Two big name creators are wrapping up their runs on two of DC’s best-selling titles. Geoff Johns is exiting Green Lantern with issue #20 after revamping the title back in 2004 with Green Lantern: Rebirth. Grant Morrison is leaving Action Comics where he’d been telling early-career Superman stories in The New 52. DC announced writer Robert Venditti would be taking over Green Lantern but that the entire GL line would also be changed up. Josh Fialkov would now be writing the Green Lantern Corps and Red Lantern books, while Andy Diggle was said to be taking over Action Comics. Interviews were done, advertisements prints, only to have Fialkov and Diggle step down in the same week.

Let’s discuss Diggle’s decision first. He tweeted, “Sadly, I’ve decided to walk away from Action Comics for professional reasons. It was the toughest decision I’ve ever had to make, especially with Superman’s 75th anniversary and Man of Steel on the horizon. But it was the right decision. No regrets. Onwards!”

From what I can gather, Diggle will have one issue, #19, published. After that, artist Tony Daniel will be both artist and writer for Action Comics. Daniel had this to say about the decision on his Facebook page:

Yes, many have heard, Andy Diggle left Action Comics after the first issue. I can only say I feel bad he made that decision. I think it was the wrong one, but that was his choice to make. For the remainder of the arc I’ll be working off his plots to finish out this first arc. So essentially, I become ‘scripter’ in the credits w/ Andy as ‘plotter.’ As for myself, I end my short run after I complete this first arc, which ends with issue 21. This was preplanned since last fall as there is another project I’ll be taking on, and assisting with, a massive project with DC. I still think people will like this arc and I’m staying as true as I can be to Andy’s plans for this story. In the end I hope he’ll find it somewhat recognizable as something he took part in.

There were editorial decisions about the direction of the book that conflicted with the story I was hired to tell, and I felt that it was better to let DC tell their story the way they want. I’m grateful for the opportunity and I’ll miss working with the entire Green Lantern team. This was not an easy decision to make emotionally or financially, but, I’m sure it was the right decision for both me, and for the Green Lantern books.

Bleeding Cool reported those conflicting “editorial decisions” were DC’s plan to kill off John Stewart. Comic Book Resources later reported, confirming that reasoning. As to that story, Fialkov tweeted, “I’m not commenting on anything other than what I posted.” Bleeding Cool has since reported DC has changed their minds on axing the character, seemingly because of the intense reaction.

And why the intense reaction? Well, John Stewart is kind of a big deal.

DC Comics does not have the most diverse cast of characters and when John Stewart was introduced in the early 70s he made quite the splash. Since then, he’s gone on to become one of the most, if not the most famous African-American characters DC has (I’d list Static as a very close second.). A big part of that popularity can be attributed to Stewart’s starring role in the DC animated universe, where a whole generation grew up thinking he was THE Green Lantern. So much so many wanted to know who that white guy was in the movie starring Ryan Reynolds. I’m not over exaggerating.

Putting aside the fact of character deaths being a lame way to try and boost sales, the possible death of John Stewart is also incredibly problematic. Why? Well besides there being too few big-name POCs in the DCU, DC recently introduced a new Earth-based Green Lantern. This new GL is Simon Baz, an Arab-American. Killing off Stewart so soon after introducing him reeks of the token minority character trope. As if someone said, “Well, we can’t have two Green Lanterns from Earth who aren’t white.”

Whether that’s a conscious decision or not, in an editorial position, you have to be aware that’s how it can appear from the outside and consider the implications. It’s something I’ve been noticing a lot on AMC’s The Walking Dead lately. A new black character will show up, only to have the previous one killed, like two are somehow too many. Again, I’m not saying there’s malicious intent here, just that you have to be aware of things like this when making such editorial decisions.

To that end, I also must mention how bad this looks for DC as a publisher to prospective creators. More and more DC is sounding like a company in which the editors tell the writers what to write and when to write it instead of letting them do the creative job they were hired to do. If writers don’t have a say in the creative process, what’s the point of them? And why hire someone if you haven’t already asked for, and approved of, their ideas?

This also looks terrible to fans who are now witnessing these types of behind-the-scenes decisions unfold on social media all too often. Seeing a creator you enjoy taken off a book or leaving voluntarily because of disagreements with editorial is extremely disappointing. Here’s hoping this trend won’t continue. If it does, I can easily see the creative output at the company tumbling downhill, and fast. I mean, would you want to write for a company knowing this is what you’re stepping into?

Edit: CBR has an updated report. “Lots of rumors out there. Here’s the truth: [“Green Lantern Corps” writer] Van [Jensen] and I have never even contemplated killing John Stewart,” Venditti tweeted. “We have plenty of plans for John. Plans that probably wouldn’t work as well if he was, you know, dead.” DC’s Executive Director of Publicity Alex Segura retweeted that statement and added, “Seeing a lot of unverified reports on this. To clarify: John Stewart is not going anywhere.”

(via The Beat, The Beat, Bleeding Cool, Comic Book Resources)