While there are plenty of heroes out there who got there powers from being dosed with radiation (usually under less than controlled conditions), this isn’t a campaign that convinces kids that chemotherapy will give them superpowers. What it is, is one that might make them feel less scared about a pretty scary situation. After all, not everybody is old enough to appreciate xkcd’s epic reframing of cancer treatment.

In case you’re wondering how the copyright agreements on this were worked out, it was pretty simple: international ad agency JWT happens to have both Warner Bros. and the A.C.Camargo Cancer Center in São Paulo as its clients. They mediated a collaborative refurbishment of the Children’s Ward, IV bag covers, and matching comics that frames their child patients’ treatments as a superscience cure for a superhero they know and love. From their press release:

Covers for intravenous bags were constructed based on characters from the Justice League, creating…a child-friendly version of the treatment. Co-developed with doctors, the covers are easy to sterilize and handle and meet all hospital hygiene standards.

(The) experience went far beyond the covers by also providing a new look to the entire Children’s Ward: the game room was turned into the Hall of Justice, corridors and doors were decorated in the same theme, and the exterior acquired an exclusive entrance for these little heroes.

Comics were also created in which Wonder Woman, Batman, Superman, and Green Lantern are laid low by their greatest foes, and depend on a superformula (delivered in an IV pouch just like the real ones the kids use) to regain their fighting strength and defeat the bad guy. 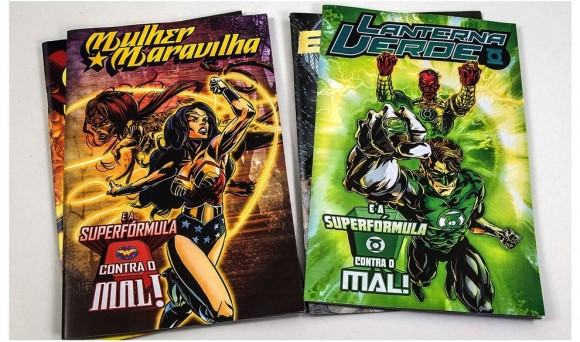 If that’s not enough to make you think there’s onions in the room, just watch this video:

You can check out some more pictures of the A.C.C. Cancer Center and their superheroic work at Buzzfeed.