DC Comics Announces Convergence, a Crossover Event to Bring the Multiverse Back to the New 52

Well, at least it's not Superboy punching the spacetime continuum. 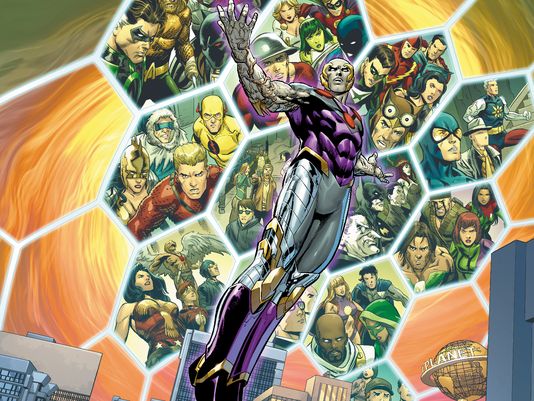 DC’s next big event is called Convergence, and although it’ll kick off on April 1st, 2015, they assure you that it is no joke.

The alien supervillain Brainiac has trapped cities from various timelines and planets that have ended, brought them in domes to a planet outside of time and space, and is now opening them for a great experiment to see what happens when all these folks meet.

Because Braniac thinks The Sims 4 sucks and needs to get his fix elsewhere, I guess. But the real villain of Convergence is purportedly a new character called Talos, the Greek word for endings, “born of Brainiac and this mysterious planet.” The writing on the main story’s nine-issue weekly miniseries will be spearheaded by Jeff King, with help from Scott Lobdell and even a bit from Dan Jurgens, no stranger to some of DC’s biggest event storylines like Death of Superman, Countdown, and Zero-Hour, another multiverse spanning story.

The main storyline will also spill into no less than forty two-part stories across DC’s ongoing comics titles, releasing in April and May. King is a television writer who has never worked in comics before, but co-publisher Dan Didio considered his unfamiliarity with DC continuity an asset: “it was great to have someone come in with a fresh set of eyes to look at it and make sure that it’s as open and accessible to all fans,” not just longtime readers. With that, I agree. One of my favorite big events of the last decade was 52, a weekly series entirely about DC Comics’ B and C list characters that, because it couldn’t assume that even long time readers were entirely familiar with its leads, had to make their characters accessible outside of a larger context.

This announcement does shed light on the promised reappearance of the pre-New 52 versions of Blue Beetle and Booster Gold, the best best-buds of the DC Universe. The writers of Justice League 3000 were mum on how they’d logistically manage to get versions of two characters from a different continuity into a time period a thousand years after their original appearances, other than the fact that the series was “suprise!” set in the year 3000 of the Pre-52 universe. Perhaps it’ll have something to do with Convergence?

But let’s change gears for a moment. My memory is not so short that I don’t remember three and a half years ago when DC Comics’ expansive continuity of parallel Earths and discarded timelines was touted as the barrier to entry for new readers that needed to be done away with for the New 52. This was why we had to condense three Batgirls into one and five Robins into four, this was why the history of the DC Universe was cropped from more than a decade of comic book time to a hard five years, and why a number of characters were benched or written out of continuity entirely.

The New 52 left a lot of stuff on the cutting room floor in the name of making the setting “less confusing for new readers,” including fifty parallel Earths. I am not immune to the sheer fun of cross-continuity stories, but I guess what I’m saying is that if we’re bringing them back that kind of sends the message that what was really too confusing for new readers was Clark Kent and Lois Lane’s marriage, much of the Flash family, an asian Batgirl, or a queer Latina The Question. Perhaps the series will be used as an excuse to bring some of those characters back, but for the moment, I’m not holding my breath.

Convergence is going to be pretty sweet, guys. :)