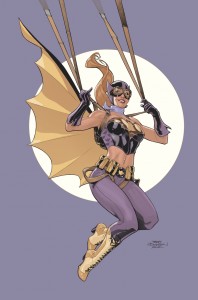 DC Bombshells, an alternate-history look at our favorite female DC superheroes, is only growing in popularity. Thanks to Ant Lucia’s amazing artwork that inspired the line in the first place, Marguerite Bennett’s fabulous writing, and a team of amazing artists throughout each issue, the demand for all things DC Bombshells has never been higher. Well, DC Comics is answering the call with a bunch of new merch as well as the title’s very first Annual!

The Annual (Terry and Rachel Dodson cover above!) is due out August 31st, the same month as Issue #16 of the regular series, and will be written by Marguerite Bennett with art by Elsa Charretier. It’ll be focused on Batgirl —  You probably guessed that from the above cover — and in this oversize issue, we’ll learn the backstory of “The Bloody Batgirl,” the Hallowe’en Horror of the first Great War.

According to The Hollywood Reporter, Bennett had this to say about the series’ success:

“The Bombshells comic is set in an alternate World War II era where the women come first — where no heroine is derivative of a male counterpart — and I think that’s why the characters and stories have really resonated with fans. Each heroine has her own senses and her own limits. No two will have the same feelings towards the nature of power, beauty, modesty, self-actualization, sensuality, etc. They don’t have to be role models, love interests or archetypes. They get to be real, complete with flaws and failings and joys of their own.”

In addition to starting up a new Annual, the DC Bombshells line will be releasing some gorgeous new merch, one of which will be the introduction of a new character in the Bombshells’ story! 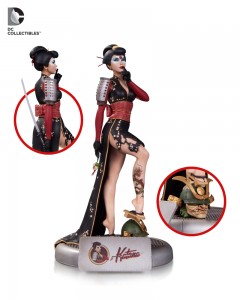 Katana is joining the world of the DC Bombshells, and I have to confess that I am completely in love with her character design. Especially the tattoo! LOVE. This beauty, designed by Lucia and sculpted by Jack Matthews, is 9″ tall and will retail for $130. However, there’s a bit of a wait on this one. Katana won’t be available until January 2017.

We will have some new Bombshells to collect as of October, though, when DC Collectibles launches its DC Bombshells busts, featuring Wonder Woman, Supergirl, and Mera! 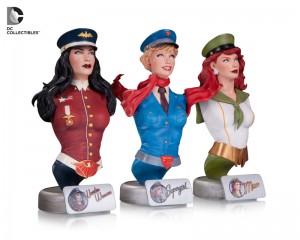 Each of these is 7″ tall and is designed by Supergirl artist Emanuela Lupacchino and sculpted by Jack Matthews. They’ll retail for $70 each.

When asked about the collectible figures, Lucia explained, “One of the main goals for the Bombshells statues has always been to portray the characters in power positions. Bombshells are meant to be beautiful, daring, proud, self-assured and physically strong icons, and that’s why I think fans connect so much with these designs.”

Also arriving in October is an awesome art book called The Art of DC Comics Bombshells! As reported by THR, the 200-page hardcover coffee table book will contain “design work by Lucia, Lupacchino and other artists including Des Taylor and Terry & Rachel Dodson, much of which will never have been publicly seen before the book’s publication.” If any visuals deserved a book devoted to their art and design, it’s DC Bombshells! The Art of DC Comics Bombshells will be released on Oct. 26 and will run you about $40.

So, take note, DC Bombshells fans! Mark August, October, and January into your calendars, and get ready to snag the latest pretties for your collections!