What is a Jet Dryer? | The Mary Sue 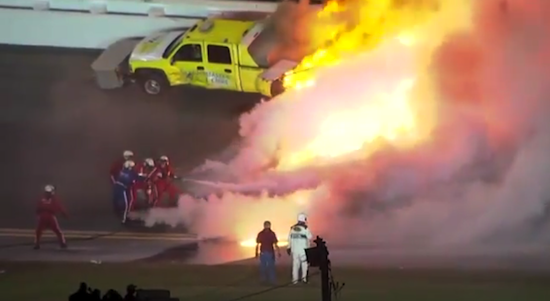 Things have been a bit crazy with the Daytona 500 this year. First rains delayed the race a day, and then last night driver Juan Pablo Montoya slammed into a jet dryer triggering an enormous fire which delayed the race for several hours. Now, if you’re like me you probably had never heard of a jet dryer was until last night. Well, wonder no more friends.

In simplest terms, a jet dryer is a device used to keep the racetrack dry and debris free. This is generally accomplished by mounting a jet engine to a slow-moving vehicle and driving around the track, so the name “jet dryer” is shockingly literal. According to ESPN, jet dryers were first introduced to NASCAR in 1976 and have been used ever since. Obviously when cars are moving at high speeds, and in close proximity, keeping the track free of anything that might cause them to spin out of control is paramount.

The jet dryer that was hit by Montoya in last night’s race was a trailer-mounted model pulled by a large pickup truck. ESPN reported at the time that the dryer in question uses a Westinghouse J34 jet engine to blow 1,100 degree air over the track. Originally developed in 1947, the J34 saw limited use at the time as the engine produced a “mere” 3,000 – 4,900 pounds of thrust. It was, however, used to power to the sleek Douglas X-3 “Stiletto” and the far less photogenic XF-85 “Goblin,” so at least there’s that. According to BuzzFeed, the particular engine used in the NASCAR jet dryer hails from the 1960s.

When Montoya lost control of his car, the right side of his vehicle went under the jet dryer trailer, briefly sending it into the air. Almost immediately, the dryer began leaking fuel from its 175 gallon reserve of kerosene jet fuel. Either the incredible heat of the engine or a spark ignited the fuel, and you can guess what happened after that.

Perhaps the most amazing part of this bewildering story is that everyone one walked away alive, and that the race was able to continue a mere two hours after the explosion.

Relevant to your interets