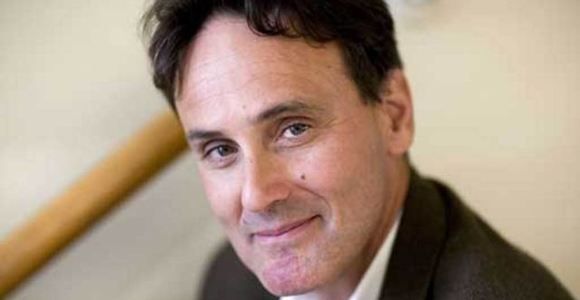 You may remember a little story we did highlighting the nominees of Literary Review’s bad sex in fiction award. Nominees include James Frey, Haruki Murakami, Sebastian Barry, Peter Nadas and Stephen King, who, as it turns out, really likes the feel of denim under his palm. But now a clear winner has emerged and that writer is David Guterson. Hit the jump to see what earned him the honor and read his reaction.

Guterson debuted 1994 with his bestselling novel Snow Falling on Cedars, but he’s getting the award for his fifth novel, Ed King, a modern reimagining of the Oedipus myth. The Guardian said, “Guterson edged out strong competition from Haruki Murakami’s long-awaited new novel 1Q84, which sees the Japanese writer pen the immortal line: ‘A freshly made ear and a freshly made vagina look very much alike, Tengo thought.'”

According to the Literary Review, Guterson won thanks in part to his over-reliance on coy terms such as “family jewels,” “back door” and “front parlour.” Literary Review’s assistant editor Jonathan Beckman and a group of judges said they were:

Swayed by a scene introduced as “the part where a mother has sex with her son,” and including the passages: “these sorts of gyrations and five-sense choreographies, with variations on Ed’s main themes, played out episodically between 10 pm and 10 am, when Diane said, ‘Let’s shower'”; and “she took him by the wrist and moved the base of his hand into her pubic hair until his middle fingertip settled on the no-man’s-land between her ‘front parlour’ and ‘back door’ (those were the quaint, prudish terms of her girlhood)”.

“He says in brackets that these are quaint, prudish terms but I don’t think that is sufficient justification for using them,” said Beckman. “It’s all slightly over the top and there’s a bit of a disjoint between this guy who is a sexual demi-god and the weird, weird way Guterson goes about describing it. He seems a bit involved in it.” Another highlight of the novel:

In the shower, Ed stood with his hands at the back of his head, like someone just arrested, while she abused him with a bar of soap. After a while he shut his eyes, and Diane, wielding her fingernails now and staring at his face, helped him out with two practiced hands, one squeezing the family jewels, the other vigorous with the soap-and-warm-water treatment. It didn’t take long for the beautiful and perfect Ed King to ejaculate for the fifth time in twelve hours, while looking like Roman public-bath statuary. Then they rinsed, dried, dressed, and went to an expensive restaurant for lunch.

“The bad sex in fiction prize was set up by Auberon Waugh in 1993 to highlight – and hopefully discourage – the ‘crude, tasteless, and often perfunctory use of redundant passages of sexual description in contemporary novels.'” Appropriately enough, Guterson’s win was announced at the In & Out Club in London.

The actual prize for the award? A plaster foot. Guterson did not attend the announcement but gave a lighthearted response to the honor, “Oedipus practically invented bad sex, so I’m not in the least bit surprised”.