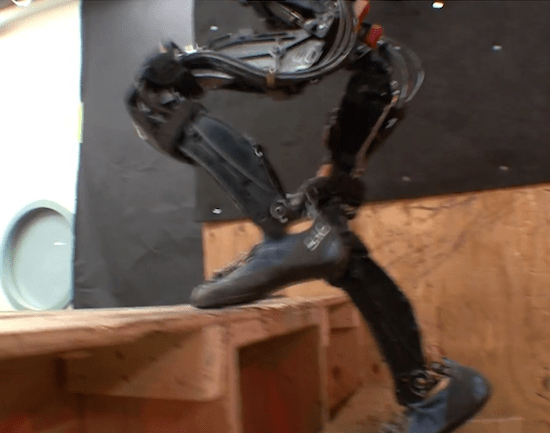 When we last saw a robotic humanoid from Boston Dynamics, it was PETMAN strutting it’s stuff on a moving walkway and doing pushups. Now, the bot’s developers and the Defense Advanced Research Project Agency (DARPA) are showing off a robot with a new and terrifying trick: Walking up stairs. But that might just be a glimpse of what will be coming in the future.

Careful readers will note that this stair-walking robot looks quite a bit different from the PETMAN robot we saw some time ago. Gone is the flashing-light head, and the bundles of wires for legs, and apparently one of its arms, to boot. Instead, the stair-walker has a single arm for balancing against walls and a decidedly jerkier gait — similar, perhaps, to early versions of the BigDog.

The DARPA video then shows the old footage of PETMAN.

The video was released in conjunction with DARPA’s robotics challenge, which has a $2 million prize to the team that can complete a series of difficult tasks. The goal, according to DARPA, is to “push the state-of-the-art in robotics beyond today’s capabilities in support of the DoD’s disaster recovery mission.” The challenge is open to universities and businesses of all sizes, which includes Boston Dynamics.

It seems that DARPA and Boston Dynamics are showing off what other contenders will be up against in the upcoming challenge. According to the information uploaded with the video, some amalgamation of PETMAN and the stair climber will be competing in the robotics challenge.

A modified platform resembling these robots is expected to be used as government-funded equipment (GFE) for performers in Tracks B and C of the DARPA Robotics Challenge […]The GFE Platform is expected to have two arms, two legs, a torso and a head, and will be physically capable of performing all of the tasks required for the disaster response scenarios scheduled in the Challenge.

The video description goes on to remind potential entrants that their robots not necessarily be humanoid. Groups interested in entering the competition, which takes place this October, are directed to the Federal Business Opportunities site for more information.

We’ll be waiting with bated breath to see what Boston Dynamics unveils for the event, and to see what competitors come up with as well. One thing’s for sure: This short video has already set the bar pretty high.