Universe’s Background Glow Could be Caused by Stars Enshrouded In Darkness. Remind You Of Anything, Hitchhiker’s Fans? 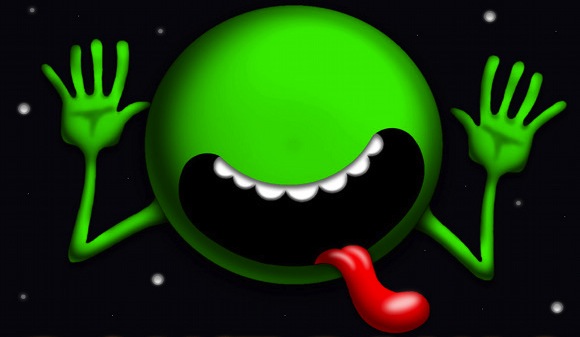 In a case of life imitating art, scientists analyzing data from NASA’s Spitzer telescope have theorized that the universe’s layer of background infrared light could be the result of clouds of dark matter with “orphan” stars in the middle of them them. If one of those stars had a planet the night sky from its surface might be completely dark, like that of the planet Krikkit in Life, the Universe and Everything, the third book in Douglas Adams‘ five-book Hitchhiker’s Guide to the Galaxy trilogy.

If anyone wants to object to The Hitchhiker’s Guide being art, step right up. I’m prepared to fight you on this one.

Though we can’t see into the clouds of dark matter, the light from the hypothetical stars would be able make it out, giving the areas around them a faint infrared glow. Says UCLA’s Edward Wright, “You can’t see the dark matter very well, but we are proposing that it actually has a few stars in it — only one-tenth of 1 percent of the number of stars in the bright part of the galaxy. One star in a thousand gets stripped out of the visible galaxy and gets distributed like the dark matter.”

(Does that make anyone else kind of sad? It’s fitting, really, as most of the books in the Hitchhiker’s trilogy, which I love, have always really depressed me. Why can’t Arthur just have something good that doesn’t get taken away from him?! OK, getting back on track…)

In the Hitchhiker’s trilogy Krikkit was isolated from the rest of the universe by a dust cloud created by the destruction of a massive supercomputer. Its inhabitants had no idea that anything besides their own planet even existed, and their first reaction to finally seeing the splendor of the universe was deciding to destroy all of it. (“It’ll have to go.”) Between this news and last week’s discovery of a planet in the Alpha Centauri system, there have been a lot of things from Hitchhiker’s popping up in the real world lately. I’m kind of nervous. I love the books, but I’d hate to live in them.