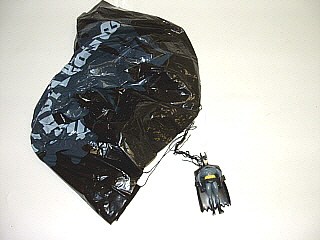 Yeah, so there’s a completely unsubstantiated rumor going around that Adam West will be in The Dark Knight Rises. Forget about that, here’s something that’s actually entertaining: Monday night, a stuntman training for a skydiving scene to be shot for TDKR missed his target in the Cairngorm Gliding Club airfield, in the United Kingdom, and wound up crashing through the roof of a house in Feshiebridge, next door to a man named Pavel Satny, who was enjoying an evening in his garden.

“It was incredible. I’m amazed he survived.

“There were five parach-utists overhead. I was busy watching one of the other men, as it looked as if he was going to land in the forest next door.

“All of a sudden, out of the corner of my eye, I saw another man fall straight down into the roof next door. He dropped just like a stone.

“I didn’t know what to do – whether to get my ladder or my wife! I got my ladder and made my way to help him.

“A paramedic from the crew arrived and helped him. He seemed OK. He told me that it was so windy and he just couldn’t control his parachute. It was all over in about 15 minutes.”

According to the Press and Journal, the skydiving rehearsals were definitely for TDKR, and their jump began at 8,ooo feet, and they’ve been working on it for a week.

Definitely something to look forward to seeing in the film.