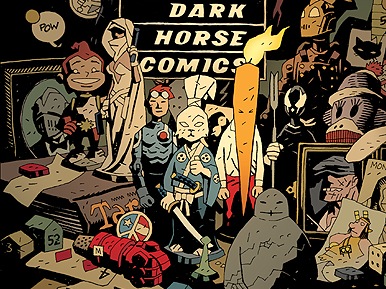 The race is on now for American comic companies to outline their competitive digital distribution strategies, with DC Comics firmly in the lead. Offering more than fifty new comic titles about their most popular characters online on the same day they are available in stores is a provocative first bet. What is the next move of Dark Horse Comics, the nation’s largest independent comic book publisher?

Well, to give details on their announced but not described retailer oriented digital “exclusive” concept. And those details… well, they make less sense.

During July through September 2011, Dark Horse will e-mail exclusive retailers a sheet of one hundred unique (one-time use) digital-download codes at the beginning of every month. The store simply prints out the codes and hands them out to loyal customers!

Customers redeem the coupon code and get their free digital comic by visiting Digital.DarkHorse.com/RetailerExclusive.

Now this isn’t actually a digital distribution push meant to stand up against DC’s Flashboot, as some are calling it. And we are now calling it. Because we like it. But Dark Horse still announced it less than a day after DC, so it’s almost impossible not to compare the two simply because of the timing.

Where DC’s approach to digital is to treat it as a full replacement for the retail experience, Dark Horse is shackling it not just to physical comics, but to getting to your store, and hoping that those one hundred codes aren’t taken yet. Obviously, the idea is to get people to go to their comic store. But setting aside the idea that the only people who are likely to become aware and interested in this offer are probably already visiting their local comic shop, why only one hundred per store? Per month? Why not give the retailers access to an online widget that creates unique access codes (and keeps track of how many they request so as to control exploiting)? Why not include codes as a scratch off in the Dark Horse comics they buy? If you are giving it out as a freebie, why not actually give it away? Online. There’s no such thing as scarcity in digital, and attempting to create it is a mistake that many people have made.

Also, you know, it would save trees.