DAPL Is Already Leaking and OMG Why Don't People Listen? | The Mary Sue

Dakota Access Pipeline Is Already Leaking and Hasn’t Even Started Moving Oil Yet and OMG Why Don’t People Listen? 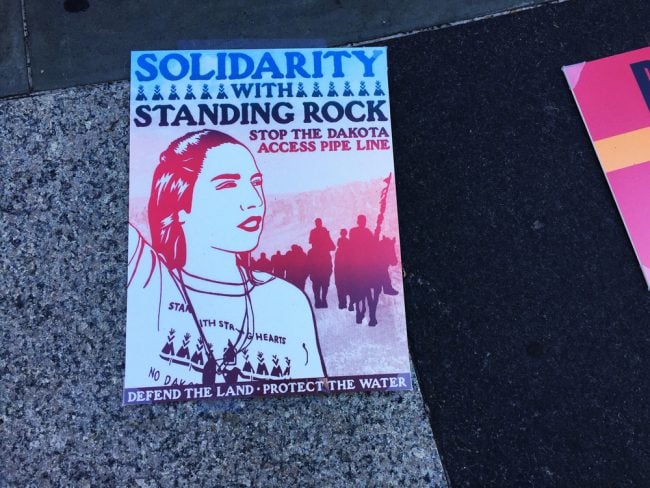 The Dakota Access Pipeline is modern, they said. We don’t have to worry about the havoc it could wreak on the environment, they said. Everything will be fine, they said. In what is sadly and merely the latest thing about which Trump, his administration, and his supporters have already been wrong (the man has only been “in charge” for a little over three months), the DAPL has already had a leak and a spill—and it hasn’t even started actually shipping oil yet.

The leak happened back on April 4th (more on why we’re only hearing about it now in a minute) while Energy Transfer Partners was testing a surge pump, which pumps oil into a surge tank, which measures flow rates, among other things, before sending the oil back down the line. Brian Walsh, an environmental scientist with the South Dakota Department of Environment and Natural Resources told Vice that the spill, thankfully, didn’t hit unlined ground, nor did it leak outside a contained area.

“There were no off-site impacts, no impact to the soil or groundwater, and the oil did not get into any surface water,” he said. He also said something that I think is the thing troubling everyone. He said that this crack and leak “wasn’t necessarily surprising,” since similar cracks and leaks have happened.

Well, that’s kinda the thing, isn’t it? To quote Snoop Dogg: listen close, to what we say, because this types ‘a shit happens ev-e-ry day!

What do DAPL supporters think the protests were about? Oil pipelines crack and leak all the time. It’s in their nature. It’s what they do, no matter how new and fancy-schmancy they are. The entire point is that there is no such thing as a completely safe pipeline, and so why insist on forcing people to sacrifice their groundwater when they don’t want it anywhere near their home? For a quick buck? (That question was rhetorical. Of course it’s about placing profit over people.)

So, the 84-gallon spill happened on April 4th, and was reported by ETP two days later on April 6th. So why is it that it’s only hitting the mainstream news over a month after the fact? Walsh says that this is standard. That the public isn’t alerted to every spill. Only the ones that cause “an imminent threat to public health.” In other words, you don’t hear about the spills until it’s already too late. That’s standard practice.

Meanwhile, as Jan Hasselman, an attorney with Earthjustice representing the Standing Rock Sioux Tribe in court says, “It doesn’t say much for the accountability of the company and the transparency of the regulatory process when these things happen and there’s no notification to the public.”

One can individually track South Dakota oil spills on a website, but there are no announcements made for specific spills. The only reason we know about this now is thanks to good ol’ fashioned journalism. A reporter for the Aberdeen American News, a local news outlet, broke the story after finding information about the DAPL spill on the site. It’s taken a month for the story to get out to us after that.

Because that’s how little our government cares about people. That’s certainly how little ETP cares. All the protests in the world, all the images of angered Standing Rock Sioux tribe members, all of the appeals to our shared environment don’t work. Because none of that matters as long as government contracts exist and there’s money to be made. Money is the only thing these people understand. So, if you want to hit ’em where it hurts, consider divesting from DAPL. Check out the #DefundDAPL site for deets.

Meanwhile, Hasselman is pursuing other legal strategies before the 1,100-mile pipeline goes fully operational on June 1. She is asking a judge to declare that the Trump administration’s reversal of the environmental study on DAPL and issuing the permits was illegal. He would then have to vacate ETP’s permits, which would stop the pipeline. But anything can happen between now and then.

“There’s no plan,” Hasselman says. “It’s just another example of the way in which the tribe’s interests have been stepped over in the haste to get this thing in the ground. But what we’ve been trying to say all along is that those risks are real. They need to be analyzed before decisions are made, and we were dismissed at every turn. It doesn’t give anybody any pleasure to say, I told you so, but—here we are.”