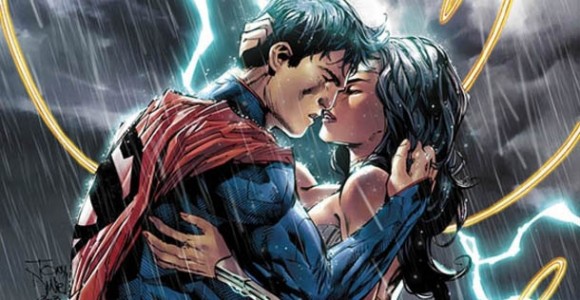 Fan Expo is taking place in Toronto this weekend and as is usually the case, DC Comics held a panel to talk about their upcoming projects. The DC All Access panel yesterday featured Jeff Lemire, Lee Bermejo, Eddie Berganza, Brian Cunningham, and Tony Daniel. While lots of books were discussed, it’s the yet-to-be released Superman/Wonder Woman title that we were interested to learn more about. Hit the jump to find out how the title initially came about, why it was compared to Twilight, and why one audience member felt the need to stand up and ask for more than just romance.

We got a tip from a reader named Jason about what went down on the panel as it pertained to DC’s female readership and searched for more information. Turns out, Bloody Disgusting recorded the entirety of the panel, moderated by John Cunningham, VP Marketing DC Comics. We’ve transcribed the following passages from their recording.

As the illustrator of Superman/Wonder Woman, Daniel was asked to speak a bit about the inception and direction of the title. He said:

It’s the perfect combination of what I wanted to do. They’re two of my favorite characters and I wanted to do Superman for a long time and I really wanted a much longer run than I had on Action. I just lover Superman, Metropolis, you know, Lois Lane, his whole world. It’s funny, because in Chicago I was talking to Bobbie Chase and Bob Harras about making a book, I wasn’t referring to creating this book, but I mentioned maybe, can we create a book that targets a little bit more of the female readership that’s been growing. And maybe a book that has a little bit of romance in it, a little big of sex appeal, you know, something that would, for lack of a better example, that hits on the Twilight audience. You know, millions of people went to see those in the theaters because it has those kind of, you know, subject matter. The drama, the characterization with love triangles and forbidden love and things like that. Literally a month later they asked me, “Hey, what do you think of Superman/Wonder Woman?” And I think it took all of maybe three seconds for me to say, “Yeah, that’s great. Let’s do that.” Because that’s exactly what I was describing that we need.

Cunningham broke in to mention writer Charles Soule’s take focuses on the nature of the relationship between the two iconic characters and then the panel went on to preview a few pages from the series. But when the Q&A portion of the panel began, a reader named Liz started this exchange:

Liz: When you were talking about Superman/Wonder Woman, what caught my ear was, you’re making it romance and romantic to catch the women. My question is, that’s not all you’re doing, right? [Laughter and applause from the audience]

Daniel: Are you asking if you’ll see like, Superman butt shots? I’ll be sure to keep it even.

Liz: Well recently there was that [Todd] McFarlane, that quote that women don’t read comics…

Daniel: Who said that?

Daniel: Oh, where is he now? [Laughter from the audience]

Liz: I love reading you guys but sometimes it really feels like you’re not making anything that’s remotely comfortable for me. So how are you going to make…

Daniel: Well why don’t you wait until October and find out?

Lee Bermejo: Can I ask, what would you like to see?

Liz: I just want to see them be awesome.

Daniel: They will be awesome. [Laughter from the audience]

Cunningham: Does the cover imagery work for you? The stuff that we’re showing? I mean the…I mean I’m really curious. Like Lee asks, what you said, if that’s not what you’re looking for, what specifically are you looking for? Or is there anything specific?

Liz: Ok well for instance, I got into the New 52 and I’m like, “Hey, Catwoman has a title!” Catwoman, I don’t think I quite enjoyed where that went a lot of the times but see, I like Wonder Woman, I liked where that was going. But then I haven’t obviously seen this one yet so I don’t know exactly where it’s going to go. But I know [sigh]

Cunningham: The good news is we got Wonder Woman right, that’s a big step. Because in my mind, as a reader myself, that’s always been an issue for me. And I think Azzarello/Chang had done an amazing job.

Daniel: You’re going to be really surprised. I mean, that’s if, you know, that’s what you’re not expecting to be blown away or something, I think you will be blown away. She’s very strongly written, she’s not, you know, I mean she holds her own. And you’re going to like the interaction between Superman and Wonder Woman and as well as their private lives, Diana and Clark. I mean, we have a lot of fun with their interactions and we’re going to have that drama. And on different levels, there’s a lot of layers to it that make it, you know, a little bit more of a more enjoyable book for me to draw and I’m sure for Charles [Soule]. We’re both doing something kind of new with this so it has a perfect recipe I think and it’s something I really want to do. I really think you’re going to like it a lot. Let me know. Just get on Facebook, let me know.

Liz eventually put her own report up of her Fan Expo experience on io9 and we’ve reached out to her for comment. We’ll update the post once we’ve heard back but she did write about her reaction to hearing the Twilight comparison.

“I’m not kidding guys, I saw fucking RED. What the ever-loving FUCK did he just say??” Adding she’s not “very confident” it will be awesome as Daniel said after hearing the description. “And I know I’m not full of shit, because I had a bunch of people come up to me after congratulating me on my question,” she wrote. “I was just so incensed that a MAJOR COMIC BOOK PUBLISHER thought the only way to get women to read his books was to make them into romance.”

For my part, I was happy to hear Daniel approached the higher-ups about reaching out to the female readership. He’s aware the audience is there and wants to be catered to more than they already are (ie, none), he’s just a bit off about what we actually want. Or what some of us want. Us ladies aren’t a hive mind of course. So do me a favor, leave a comment letting DC (and all publishers really) know what you want to see, or don’t want to see as the case may be, in their comics.

[UPDATE] We’ve heard back from Liz who gave us the following statement about her experience now that it’s sunk in:

Now that I’ve had some more time to think about it, what really made me upset was Daniel’s “Superman’s butt” comment. Just what I wanted! Male crotch shots. Maybe they’ll break his spine as they contort him so we can see pecs and butt at the same time. That’s not what I want. I don’t want them to treat Superman like how they treat Catwoman. Or Starfire.

I know I don’t speak for every woman, but I think I can with this statement: All we want are good, well written characters and stories.

With the Twilight comment, as I understand it they want some of that sweet, sweet female teenager disposable income. I get it; there’s gold in them thar hills. I just don’t trust them not to go to cheap pandering.

I can’t help but think that if this series fails, it’s an excuse for DC to say “Look! We tried! The ladies just don’t like it! See? Women don’t read comics!” If it’s successful, which it might be, they’ll completely move over to making only romantic titles, because they now have something that works. The regular comics will become even more entrenched as “for the guys” and any progress made in the past will be wiped out. There will be nothing but Boobs and Butt poses and smaller and more ridiculous costumes.