Wish a Happy Birthday to Damian Kulash, the Singer From OK Go, via Special Birthday Hotline 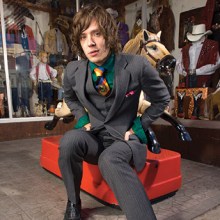 Once upon a time, I went to an OK Go concert. I was a fan, so I knew to expect something fun. Not only did they perform multiple choreographed dances, but they performed Les Mis during a short segment when a guitar string broke and they were waiting for one of the band members to fix it. After the show, I asked the singer, Damian Kulash, for a sweaty hug, thinking it’d be a fun story to tell later. Damian felt a sweaty hug from only one member of OK Go would be insufficient, so he called the rest of the band members over (who were all engaged in other conversations spread around the club) and recruited them to sign my ticket stub and give me a sweaty hug from the entire band. It was simultaneously awesome and disgusting, and I was dripping wet with other people’s sweat for the entire ride home after I left the club.

So, when OK Go makes a special hotline available that anyone can call to wish Damian Kulash a happy birthday, you should probably take advantage of that if you’re a fan of the band, because Damian would probably do something fun for you if he could. The number for the hotline is 773-669-6546, and OK Go encourages you to call or text and leave a musical message or just say hi. The tweet also says the band will post some good birthday wishes, so hey, it could be a fun way to get on their radar.