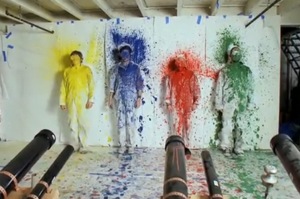 OK Go! is a Chicago-area band of talented hipsters, known as much for their impossibly imaginative and perfectly executed music videos as they are for their infectious indie pop musical stylings. While cool dudes (and devotees of PRI’s This American Life) have cherished this group since the late 90’s, they are perhaps best known for their “treadmill video” as well as a slew of other great videos. Somehow, they’ve outdone themselves, with a Rube Goldberg-esque version of “This Too Shall Pass.” Do not deny yourself 3 and half minutes of joy and watch the video.

Only half-jokingly do I ask: when are these guys going to be recognized for the geniuses that they are? To wit – they are known for brilliant, yet lo-fi, homemade music videos that rely on brilliant concepts and super-disciplined production, as opposed to digital post-production and million dollar budgets. And to top it off, this is the SECOND video of this song to be released! The first was just as an ejoyable, spirit soaring experience that featured the Notre Dame marching band in camouflage. YES – It doesn’t make sense, but that’s the best description.

As we mentioned before, OK Go!’s label EMI, received quite a lot of criticism for not allowing the band’s videos to become embeddable. Well it looks like they finally wised up. BTW, do yourself and the band a favor by going over to OKGO.net and support them with your dollars. Indie bands don’t really make much money – and they’ve proven that their hearts are in the right place.

A little trivia – OK Go! was first discovered by Ira Glass, host of This American Life, who just liked this unsigned band and had them play on his second live tour of his radio show. So thanks Mr. Glass. Please watch the videos. (H/T Nerdist! who appropriately calls this the great music video ever made!)

And now their other version of their video (that’s somehow equally enjoyable?)

OK Go – This Too Shall Pass from OK Go on Vimeo.