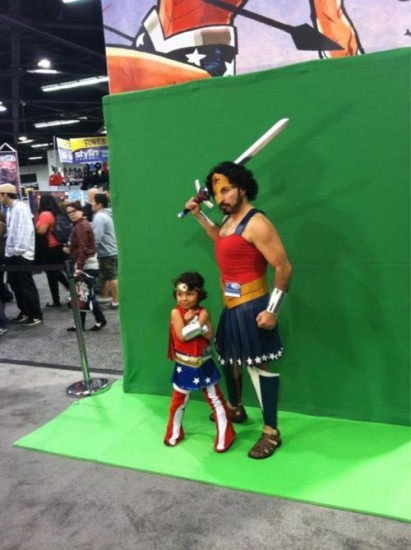 If there’s one thing I’ve noticed about genderswap cosplay, it’s the major differences in the tone of a cosplay depending on the gender of the cosplayer. Most of the pictures I see of women dressing as male characters are played perfectly seriously: their cosplay is intended as translation. As much of the character’s original personality, costume, and badassness (the stuff that would make you want to be that character in the first place) is preserved as possible. When I see male to female genderswap cosplay pictures trending, however, the cosplay is usual one of parody (with some notable outliers such as the male cosplayers in the Genderswap Justice League and other similar endeavors). A group of dudes who rented some Disney princess outfits and wigs, or a heavily bearded guy in a Chun-li costume are the ones most prominent in my mind. In these cosplays, the fact that it’s genderswap seems to be used as a joke, a self effacing one to be sure (ha ha, I’m such a hairy/muscley/paunchy guy, isn’t it a weird juxtaposition to see me dressed like a lady character?), but still one that enforces the idea: a woman dressing as a man is taking a stronger archetype and making it her own, a man dressing as a woman must be having a laugh at his own expense because he certainly isn’t gaining any confidence from pretending to be a female character.

Which is why I love this father/daughter cosplay. Look at that guy. His little girl likes Wonder Woman, and dammit, that makes Wonder Woman awesome. He’s not dressed as Wonder Man, he’s Wonder freakin’ Woman, and it’s not a joke. How could he joke about his little girl’s favorite superhero? Why wouldn’t he want to be her hero? Not a different version of her hero, but her hero. Ahg. They’re even standing in front of a giant Wonder Woman #1 banner. It’s just too awesome.