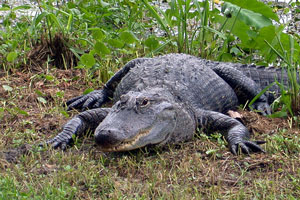 You’ve probably realized that running your car on the ancient compressed remains of animals that lived thousands of years ago is starting to get a little expensive. Well, researchers from the University of Louisiana at Lafayette published a paper in the Industrial Engineering Chemistry Research that suggests we can turn Alligator lipids (fat) into biofuel for something that costs around $2.40 a gallon. Not bad right?

Now, before anyone gets all up in arms, no one is proposing that we start farming and butchering alligators for the sole purpose of turning their fat into fuel. Instead, they’re suggesting that we take the fat from the alligators we are already farming and butchering for other things and turn that into fuel instead of simply throwing it away like we are right now. The alligator skin and meat industry creates a byproduct of over 15 million pounds of alligator fat each year and, at the moment, it’s all going to waste.

Those 15 million pounds of fat, if processed correctly, could be turned into 1.25 million gallons of fuel. All we would need to do is cram it in a microwave instead of the dump. That, and treat it with chemical solvents, a process which turns about 61% of the fat into usable fuel. Still, when that 61% percent is refined, it is 91% as efficient as petroleum-based fuel.

Now, that 1.25 million number seems pretty sizable, but in the grand scheme of things, it’s sort of a drop in the bucket. There were 300 million gallons of biodiesel produced in the US last year, so if we optimized our gator-fuel potential, gator-fuel would make up for less than .5% of national biodeisel production. Still, at the moment, the fat is just going to waste, so if the resulting fuel sales could cover the start-up and production costs, why not? It may not make a huge dent in the biofuel world, but the “recycle all the things” mindset is a good thing to develop and encourage. The real question is, does crocodile fat work too, or is that just another one of their differences that I stand no chance of successfully remembering?