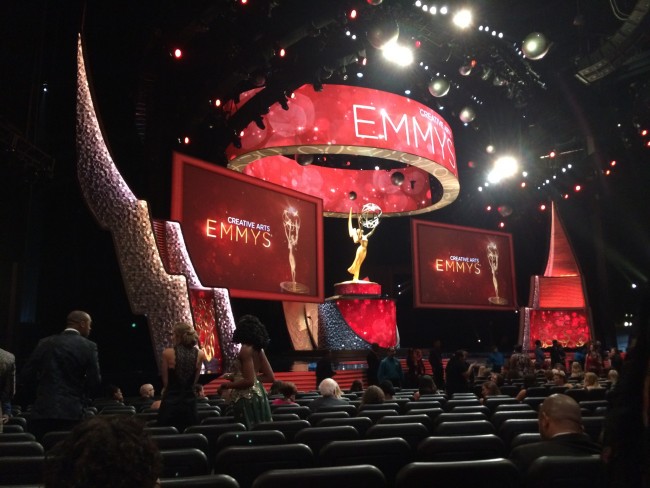 As TMS’ Carly Lane reported yesterday, the Creative Arts portion of the Emmy Awards, which were held over two nights this weekend, “is a portion of the Emmys which airs prior to the main ceremony–and mostly recognizes technical achievements such as cinematography, music and visual effects, although several acting awards are also given out for categories like guest appearances and voice-over narration.” Last night was Night 2 of the awards, and it proved to be both an awesome night and a somewhat disappointing night for shows that value representation.

First, the good! The A&E reality series Born This Way took home the Emmy for Outstanding Unstructured Reality Program. Now at the end of its second season, Born This Way is the story of seven 20-something adults seeking careers, having fun, building friendships, and looking for love…all as they deal with the special challenges that come with having Down Syndrome.

According to The Washington Post, 400,000 people in this country have this condition, and yet they are rarely seen in any media or pop culture (Though Ryan Murphy seems to have been trying to single-handedly remedy that by casting actors with Down Syndrome on shows like Glee and American Horror Story). Born This Way gives us a glimpse into the lives of a widely misunderstood population and helps viewers see them as nuanced people, breaking down stereotypes without being “inspirational” schlock.

Another big win came for RuPaul, who after eight seasons of hosting RuPaul’s Drag Race finally won for Outstanding Host For A Reality Or Reality-Competition Program. While RuPaul has certainly been problematic in his own right (specifically when it comes to the trans cmomunity), there’s no question that in his eight years of Drag Race, not to mention his drag, acting, music, and modeling careers, that he’s brought an increased visibility not only to gay men of color, but gay men of color who push the boundaries of gender expression.

There were a couple of disappointments, too. Digital series Her Story, which we’ve covered here a bunch, was the most indie thing nominated, worthy not only for the craft involved in creating it, but for its unflinching look at the dating lives of trans and queer women  of all shades. It’s yet another example of a well-made show that exists to give voice to an underrepresented community. However, in the category of Outstanding Short Form Comedy Or Drama Series (Comedy and Drama should definitely have their own categories, IMO), it was Children’s Hospital who walked away with the prize.

Still, the cast and crew know that simply being in the room was a huge achievement for a show like Her Story:

We didn’t win. But truly, us being in this room is such a victory for indie creators & queer people. Thank you ALL for you love & support. 💖

We’re in this to tell the stories of marginalized people. That’s our work, and this little success has only invigorated our sense of purpose

Meanwhile, another huge TMS favorite, Steven Universe, was nominated for Outstanding Short Form Animated Series for the episode “The Answer,” and was the only animated series nominated that was created by a woman. Sadly, SU lost the Emmy to Robot Chicken Christmas Special: The X-Mas United.

This isn’t to say that these aren’t fine shows, but Her Story and Steven Universe are not only excellent shows, but they’re excellent shows that are changing the face of television. They’re not just there for pop culture references and snarky humor. They’re there providing the diversity that Hollywood claims to care about now. But I suppose that Born This Way helped them fill their quota? Here’s hoping that next year’s Emmy voters reward excellence not only in craft, but in mission and contribution to the industry and culture at large.

(via Emmys.com, image via Ada Douglass)